On December 25, Minister of Culture, Sports and Tourism Nguyen Ngoc Thien congratulated the 10,000,000th lucky tourist – Michael Tonge (a UK tourist), along with the 9,999,999th and 10,000,001th tourist in at the Phu Quoc airport, he wish them a warm Christmas and New Year holiday in Vietnam. 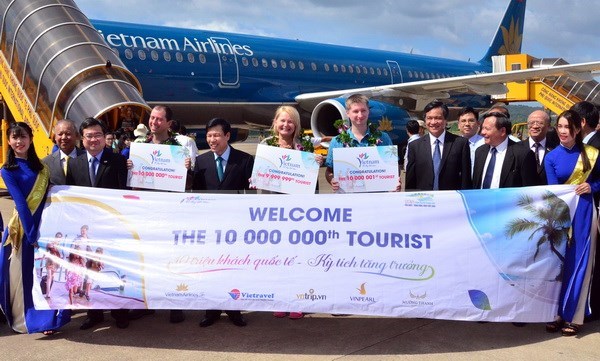 The welcome ceremony for the 10 millionth foreign tourist

This is an important milestone of Vietnamese tourism, marking an impressive growth of the sector in 2016, with an increase of 2 million visitors over 2015. The high number of visitors contributes to affirm that Vietnam is an attractive, friendly and safe destination in Asia-Pacific region.

Vietnam has already offered visa exemption to tourists from South Korea, Japan, and Southeast Asian countries, as well as extended visa-free programs through June of next year for travelers from Western Europe, including those from the United Kingdom, France, Germany, Spain and Italy. This has helped increase the number of foreign tourists to Vietnam.

In 2017, the country’s tourism sector targets 11.5 million visitors, 66 million domestic tourists and 460 trillion VND in revenue. Tourism is expected to become a key driving force in Vietnam’s economic growth by 2020.