The summer time should be the best time to discover the Tonkin Gulf in Northern Vietnam for sun, sand, sea, sky and seafood. My wife and I escaped there for a 2-night experience, taking some time to see the beach, hiking, kayaking and cruising around Halong Bay and Cat Ba Island.

Our luxury adventure starts with a road trip to Bai Tu Long Bay which took us 3.5 hours by road with a stop along the way in the Dong Trieu Ceramic Village. We boarded Emperor Cruises and sailed into the foggy haze over Halong Bay. The bay has a ferry feel, a sort of ‘Pirates of the Caribbean’ atmosphere with the hundreds of other junk boats cruising by. Halong Bay was just breathtaking; the tourist offices say it is ‘The jewel of North Vietnam,’ and it was everything the guide books said it would be. We never realized just how massive and beautiful Halong Bay is. It seemed never ending. Halong translates into “where the dragon descends into the sea”, and there are hundreds of ghostly islands that look like they are floating on top of the calm bay. The edges have eroded away with the tides creating little caves to the other side. Halong Bay is world heritage listed, and now I can see why.

After a relaxing sail, we stopped to admire one of the many limestone caves in the area. The caves have a bumpy mattress effect on the roof where the water has been dripping for many years, and there are some very amusing rock formations of a Buddha, a turtle, Jesus and yes, even a penis.

The afternoon was spent kayaking in these beautiful waters. The kayaking was it the highlight of the day, and I am really annoyed that I used up all my photo memory because words just cannot describe it. 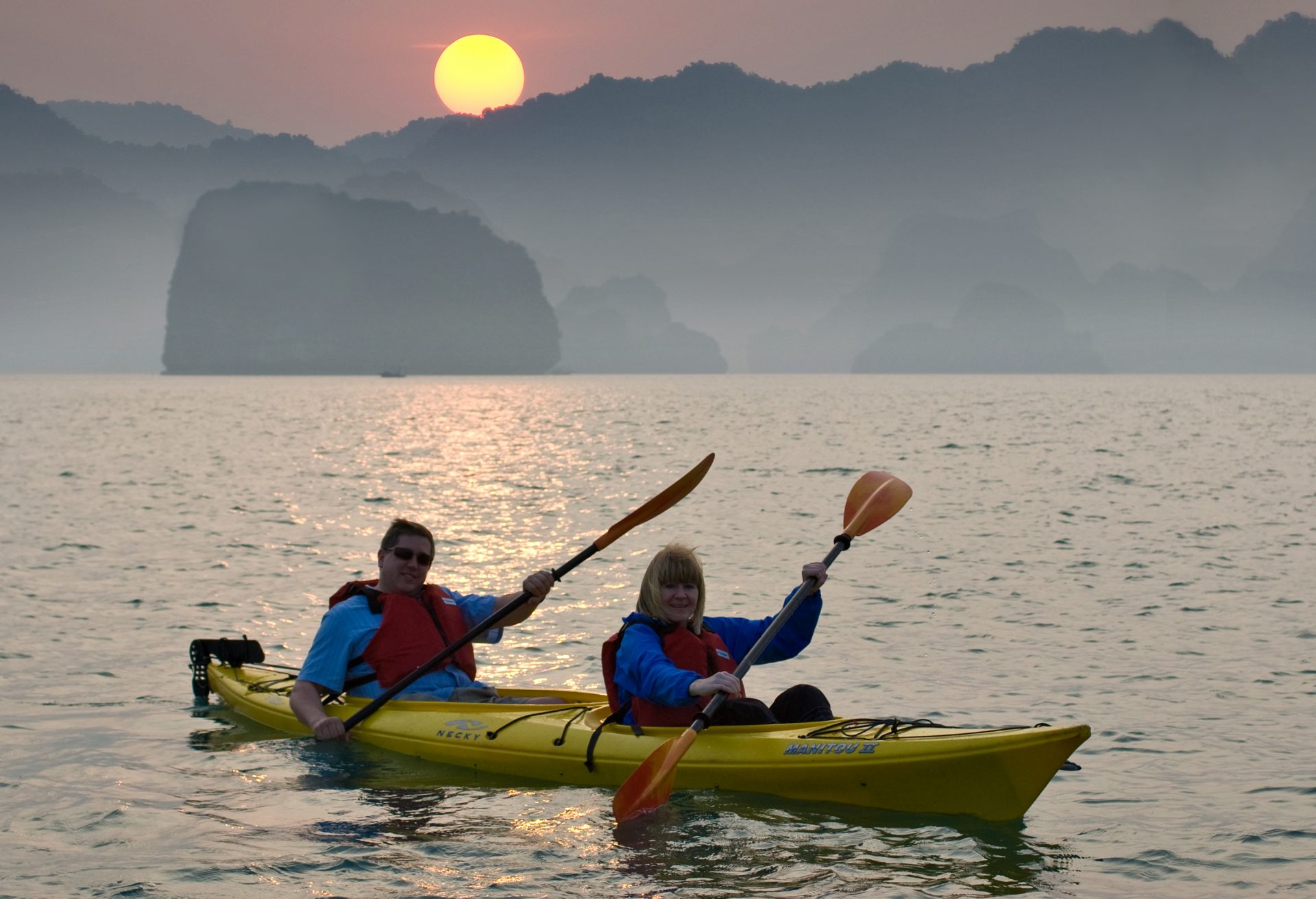 Our guide asked us if we could swim then sent us out into the waters and told us not to get lost. Meanwhile, other professional looking groups with guides and life jackets purposefully weaved their way through the islands off to somewhere special.

It as kind of funny really. I am not complaining, that is the way we like it (tours not for us). We followed the other group some of the way, paddling through the floating villages, the water was quite warm, and the weather had cleared.

Sam spotted a little cave under a small island and with his excellent steering technique we made it through without bashing the sides. Inside the cave, it was dark and echoic, and the water the most beautiful emerald green.

On the other side, we were surprised to find a gorgeous secluded beach where we trod on oyster shells, examined a piece of foam stuck in the rock and re-enacted a ‘Wilson’ scene from the movie Castaway. It was so private, and I wonder how many of ‘The Beach’ type places exist out here in Halong Bay.

The Emperor Cruise boat is a traditional wooden boat with enormous sails. The sleeping berths are along the bottom of the vessel, the restaurant on the second level and the open air deck on the 3rd where you just sit back with your beer and watch the thin mist settle on the bay in the lazy afternoon. I rest my legs on the deckchair while enjoying the view. If only every day could be like this!

After visiting the caves, the boat churned along towards Cat Ba Island. Surprisingly, it took 2 1/2 hours. As we started to sail into choppy waters, I spent half of that time turning blue and resisting the urge to chuck over the edge.

One should stay on an island for a few days rather than just taking a cruise. We then caught the public ferry from Tuan Chau To Cat Ba island and then back to Hai Phong by speedboat the following day.  There are rock climbing opportunities on the amazing karsts, and the beaches have probably the best views in Halong Bay.

The best option on the island is Cat Ba Sunrise Resort, where rooms cost from about £90 but it’s a bit too big and dated for my liking. There are lots of other backpacker options on the island but nothing top-end.

Trekking in the Cat Ba National park is the highlighted experience on the island and highly recommended. We rented a bike and explored it by ourselves with an Experience Halong Guide Book in hand.

We have learned from the book that Cat Ba’s beautiful national park is home to over 1500 plants, many of them indigenous to the Halong Bay area, and 58 species appear in Vietnam’s Red Book of endangered and threatened species.

The park is also home to dozens of mammals, many endangered, including the golden-headed langur, possibly the world’s most endangered primate. In the past, there were thousands of these langurs on Cat Ba, but because of intensive hunting, there are believed to be just a few dozen surviving. Other endangered species include the rhesus macaque, leopard cat, giant black squirrel and civet cats, but only the macaques and deer are regularly observed by tourists.

Cat Ba island lies on a major migration route for waterfowl that roost in the mangrove forests. Around seventy different species of birds have been spotted here, including hawks, hornbills, and cuckoos. 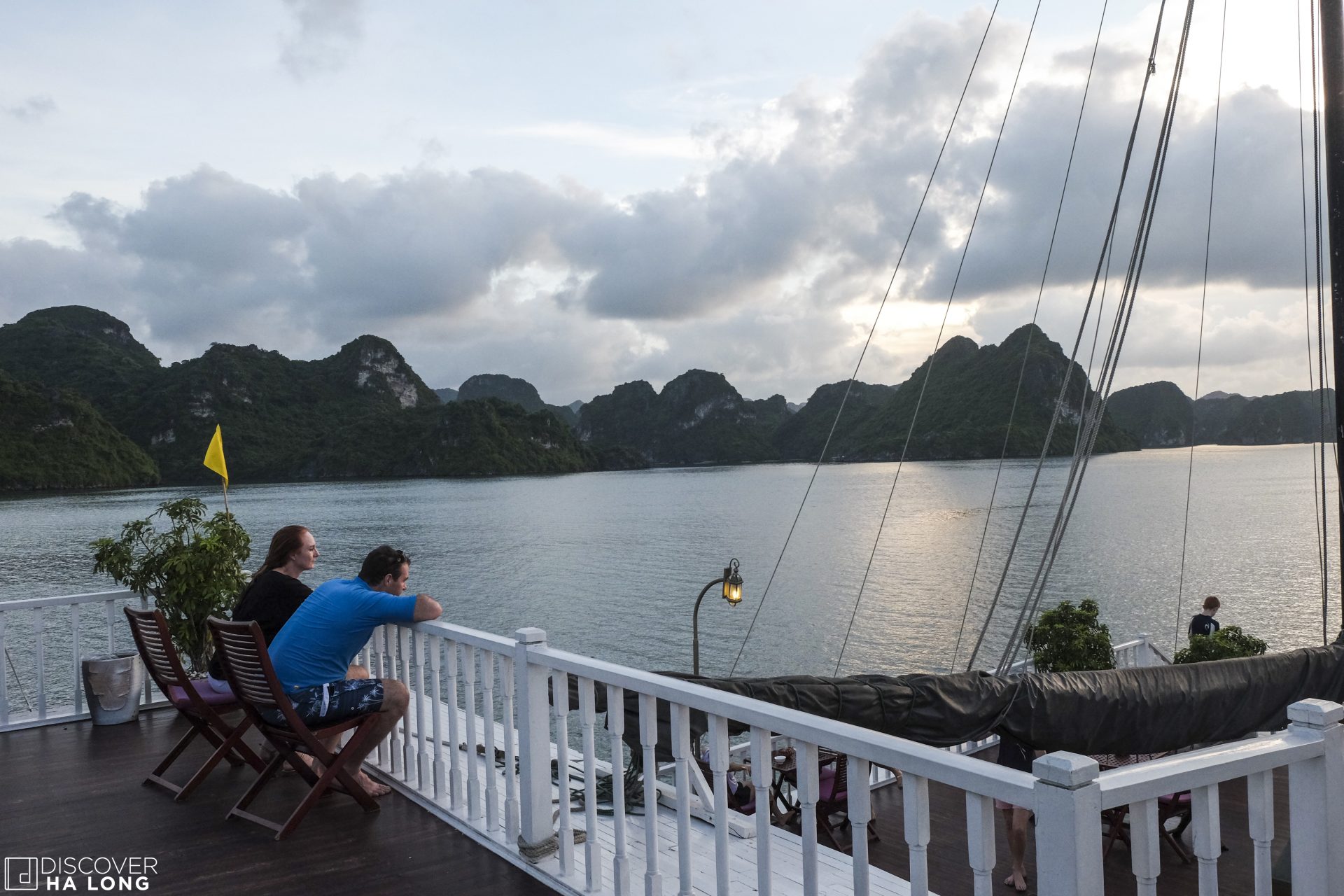 There is no setting quite like that of the sundeck of a Halong Bay cruise, where I had the pleasure of sipping a great glass of wine surrounded by dozens of islets in the majestic sunset dawn.

I regret to have scheduled just 1 night on Cat Ba Island; it should be three nights there for an authentic island experience to discover Lan Ha Bay, Monkey Island, and Cat Co Beach. You can plan the trip in a reverse way, Hanoi – Hai  Phong – Cat Ba Island – Tuan Chau  – an overnight Cruise, and then finish in Hanoi. I recommend you stay two nights on the boat if time permits.