A village in Bai Tu Long Bay has earned a well-deserved reputation for producing some of the world’s most exquisite pearls. 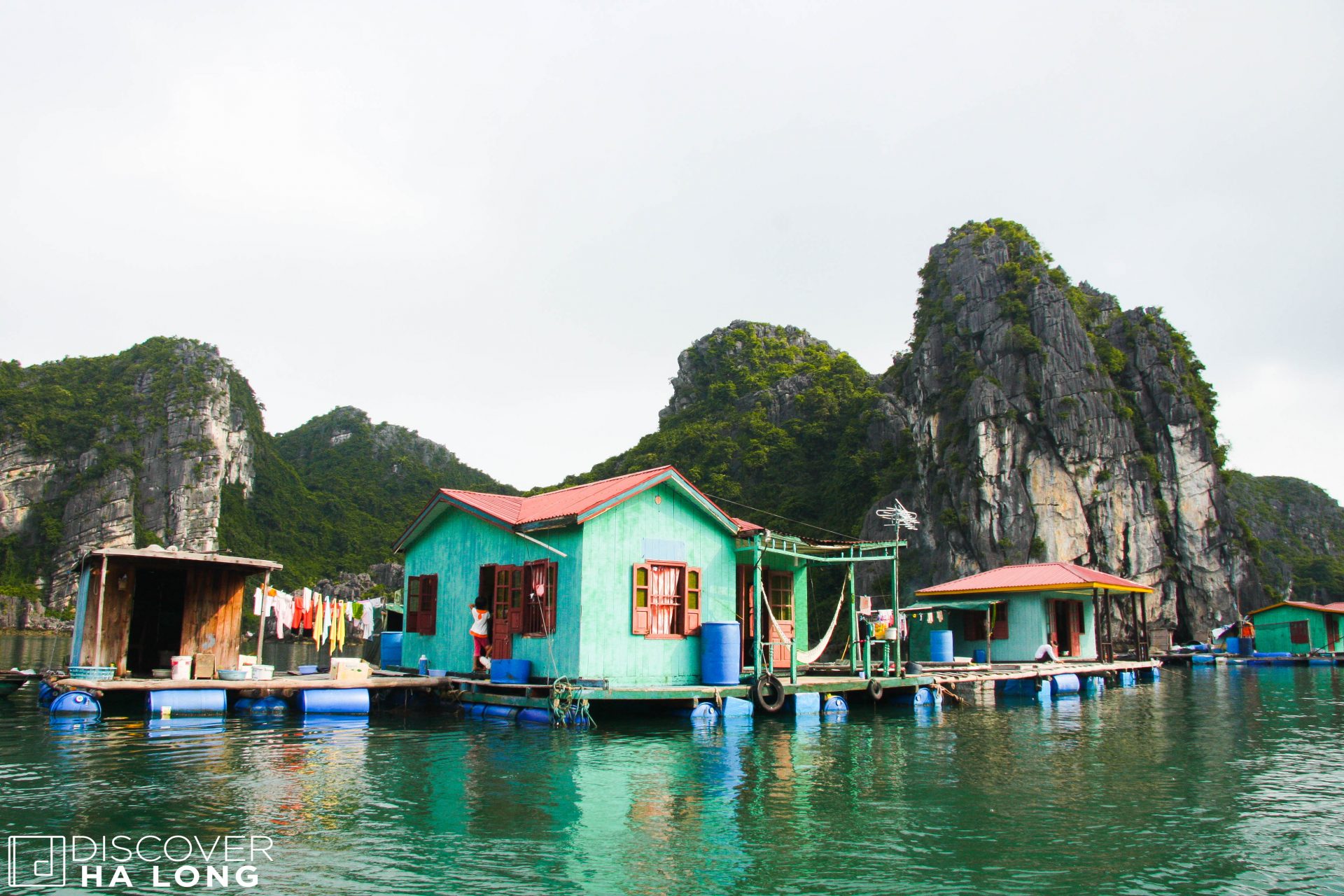 In Bai Tu Long Bay, northeast of Halong Bay and with similar rocky outcrops, is a pearl farming village that annually produces millions of colourful, glittering pearls that are not only beautiful in colour and large in size but also of high quality.

Its pearls are considered to be some of the best in the world. Despite changes throughout history, today the pearl farming village is famous and known as ‘The Kingdom of Pearls’.

Legend of the ‘pearl-spitting dragon’

Before sunrise, many fishermen head back to Cai Rong Harbour in Van Don district after a night at sea. As their work ends, hundreds of others prepare for another day offshore at the village’s pearl farm. The freshness of the morning air and the saltiness of the sea breeze announce the start of a new day.

Sitting in the prow of our boat, Mr Nguyen Van Cuong, a pearl farming expert, gave us an overview of the area. ‘This is paradise for producing cultured pearls. There are few places around the world with such ideal natural conditions for producing the best quality pearls, and a local legend explains how the area was formed millions of years ago,’ he said. 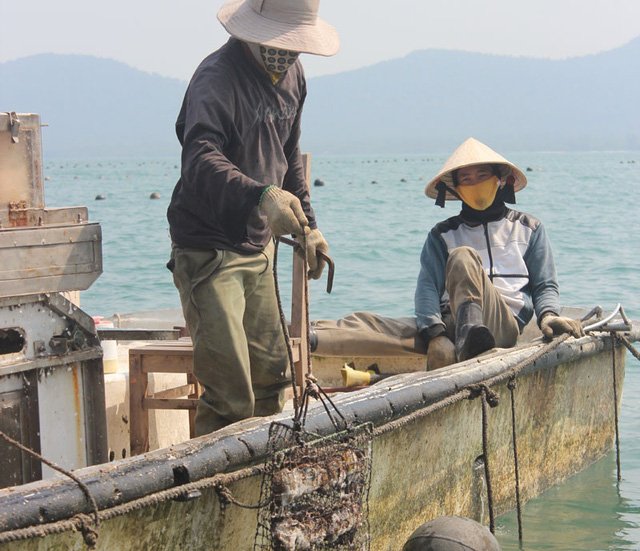 According to the legend, Vietnam was at war and the Gods sent the Mother Dragon and her children to help the Vietnamese people fight against their enemies. When the enemies’ ships approached the shore, the dragons spat out many pearls, which turned into thousands of rocky islands, creating a solid wall to form barriers and block the attacks.

After the war was over, the Mother Dragon and her children decided to stay and protect the area forever instead of going home. The Mother Dragon landed in Halong and the children in Bai Tu Long. Their tails created Long Vi, whose white sand beach stretches for more than 10 km. Many of the other islands in Van Don district have names linked to the legend, such as Minh Chau Island (Bright Pearl) and Ngoc Vung Island (Glowing Pearl).

For generations people have viewed pearls as a precious item and a gift a man takes to his fiancée’s house to formalise their betrothal; a symbol of his love, strength and courage. Pearls that are blue in colour represent purity, while pink indicates sophistication and those that are silver, elegance.

‘Many years ago, pearls could be found everywhere. People gave their loved ones pearls as a present and they could also be used for healing,’ said Mr Cao Tuy, former Director of the Quang Ninh Department of Fisheries. ‘When a child had a fever, they would drink a mixture of water and pearl powder.’

The ancient Van Don Trading Port was well known for the variety of goods traded, including natural pearls, which were used to make expensive jewellery for the elite. Foreign traders paid enormous sums for the pearls, which were considered rare items around the world.

The technique for producing cultured pearls was developed by the Japanese, who took the process to areas that had perfect conditions for pearl farming. Bai Tu Long Bay was one of them. Combining this method with expertise gained over thousands of years, pearl farming increased rapidly in Van Don district.

After an hour sailing in the bay we reached the pearl farm, which is about 40 ha in size and full of clearly numbered rafts, below which oysters cling. Ms Nguyen Thi Thanh, the manager of the technical department at the Vietnam Pearls Taiheiyo Shinju Company, who has 30 years experience in the field, began assigning tasks to nearly 200 workers, who were divided into groups of ten or so to clean the ‘pearl fields’.

The process of pearl production

In the 1990s the Japanese chose Bai Tu Long Bay as a place to produce cultured pearls. Within a few years Van Don pearls were recognised as luxurious products, perfect in shape and size with a bright translucence, and gradually conquered sophisticated markets such as Japan and the US.

There are many steps in the process to get a high quality pearl, and the workers have to be skilled and experienced as well as have perseverance and ingenuity. ‘Firstly, young oysters, of which there are around 70 million in each season, are selected because they are healthy and disease free,’ Ms Thanh explained. ‘The tiny oysters are put into mesh bags and then hung on rafts at a depth of 3 metres. These are ideal climatic conditions, avoiding waves and protecting the young and weak oysters. Then, every week, we pull them up for cleaning.’

After 18 months of constant care, in June or July around 20 million are selected to be implanted when they have reached 18-22 grams in weight. Later, the selection process is repeated with around 10 million chosen for special care.

‘Oysters that are too healthy cannot be implanted because they will reject the nucleus, and those that are too weak will not be able to nurture the nucleus,’ she told us. ‘If the oyster has too many nuclei implanted, the outer coating produced will be imperfect, so the pearl will not be high quality and the colour won’t meet requirements.’ The final 10 million oysters, stored in cages holding 150 each, follow a special regime for a week that involves a constantly changing environment before being taken to the operations room to be implanted.

‘Compared with the rest of the process, the implantation stage is the most painstaking and requires skill and perseverance from the workers, who can implant around 300 oysters each day,’ said cultured pearl expert Mr Nguyen Van Cuong. ‘The work requires attention to detail, as the oysters may die if the nucleus is inserted in the wrong place.’

The workers must determine the best place for implantation that would have the least impact on the oysters. There are two common types of beads for implantation: ones made from plastic and ones made from mollusc shells, which are superior. A small piece of tissue from another mollusc is implanted to create the donor shell, and if the oyster accepts the bead it begins producing the organic coating (nacre) covering the bead, to create the pearl.

Mr Okumoto Masahiro, Director of Taiheiyo Shinju Vietnam Company and one of the world’s leading experts on cultured pearls, describes Bai Tu Long as a kingdom of world-class pearls, having surveyed many other locations with a view to develop pearl farming.

‘Quang Ninh province is proud to be a pioneer in producing and crafting cultured pearls in Vietnam,’ said Mr Vu Van Nam, Director of Quang Ninh’s Department of Aquaculture. ‘Thanks to high-quality Japanese manufacturing processes and breakthrough technology, Vietnamese pearls are now registered under the name Spica. This is a quality product that brings great economic benefits to the bay. Quang Ninh is striving to become one of the most famous pearl farming areas in the world, utilising its idyllic natural conditions.’

Emperor Cruises takes travellers to unlock the beauty of Bai Tu Long Bay and the pearl farming village in ‘The Kingdom of Pearls’.