Venturing off-the-beaten-track to Bai Tu Long Bay, we crafted our own adventure, got lost in paradise and found Halong Bay’s more beautiful cousin. 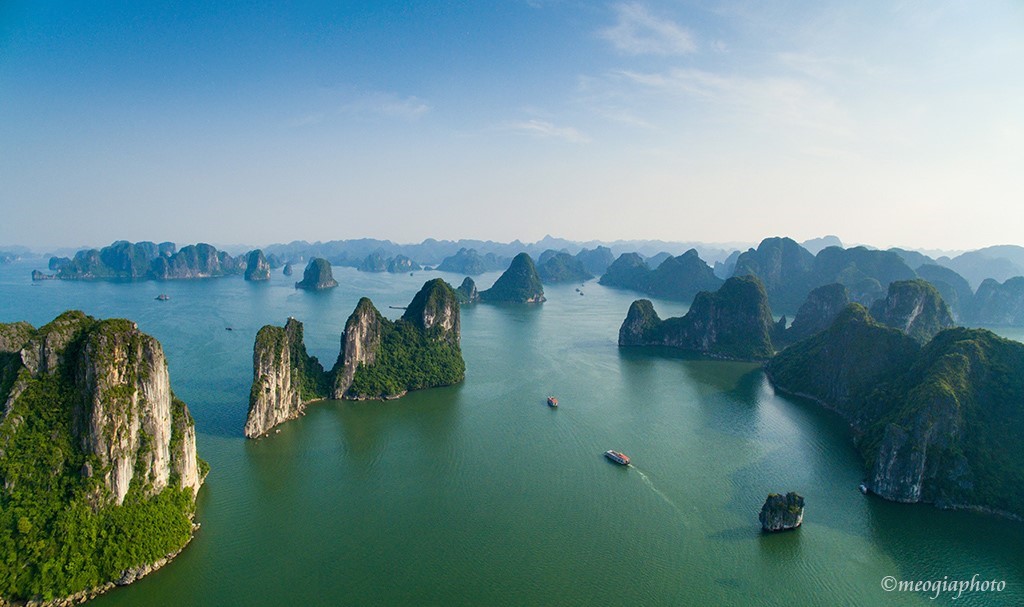 With my French friend, Thibault, we booked the whole trip through a luxury cruise company, for a 2-day escape into Bai Tu Long Bay. We ordered a private car from Hanoi, although a shuttle limousine is provided if required. We had a special request, which was to climb to the top of Bai Tho Mountain.

Thibault wanted to cruise on Bai Tu Long Bay which is adjacent to, but smaller and quieter than its more famous neighbor, Halong Bay. The name, Bai Tu Long, means ‘the place where the dragon children descended,’ It truly is a hidden gem, and its beauty surpasses that of Halong in my opinion. Rich in biodiversity, with a pristine environment and blessed with a spectacular landscape, the Bay is dominated by thousands of limestone karsts and islets which rise out of the water. Dotted with floating villages, unspoiled beaches, caves, grottoes and tiny coves, here, you can hide and be  Robinson Crusoe for a day. 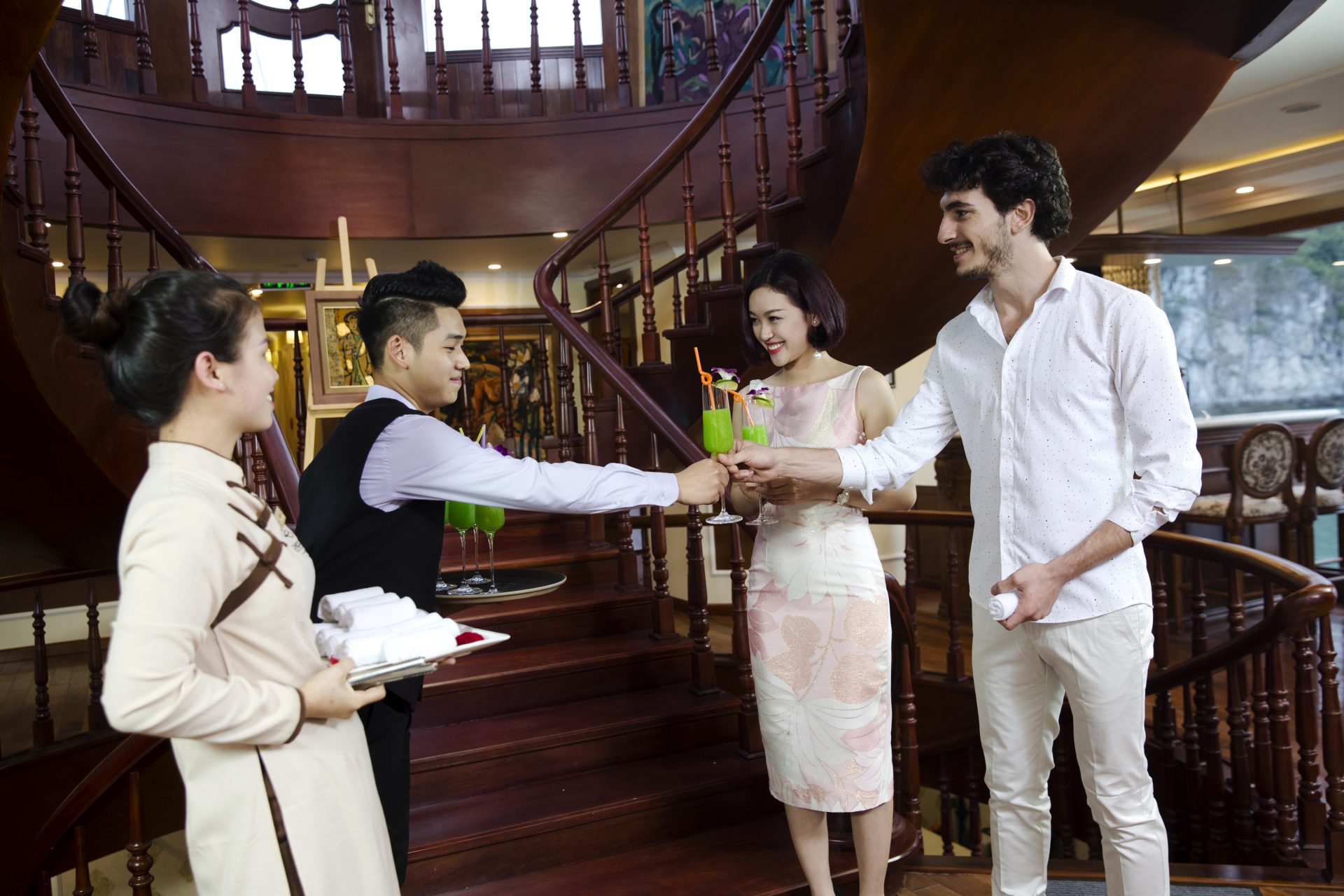 Our private chauffeur picked us up at our hotel in Hanoi to travel to Halong Bay. The ride was quite comfortable and included a  thirty-minute stop en route for refreshments. We arrived at the Emperor Cruises Harbor around noon on what was fast becoming a beautiful sunny day,  We were welcomed by the friendly crew before boarding, assisted by our Experience Manager, Richard Park.

The beats of drums warmly welcomed us on board, and Thibault was immediately impressed by the elegance and ornate style of the junk. He particularly enjoyed the artistic inspiration behind the boat’s design, particularly the stunning paintings by famous Vietnamese artist, Pham Luc.

The Experience Manager explained the safety regulations along with a brief history of the Emperor Cruises vessel. Guests do not feel like they are on a boat, but rather in a castle. Inspired by the lavish lifestyle of Emperor Bao Dai, the last Emperor of Vietnam, it is designed to reflect the style of the 1930s and is the perfect choice for travelers who wish to enjoy Vietnamese culture, history, and gourmet cuisine.

Cruise among the many beautiful islets (where scenes from the film L‘Indochine’ were filmed), and through the wild beauty of Bai Tu Long Bay whose panoramic views from the boat are unforgettable. A set lunch is served at the Can Chanh Palace Royal Restaurant on the main deck. Savor delicious Vietnamese food while admiring the grace of the bay. 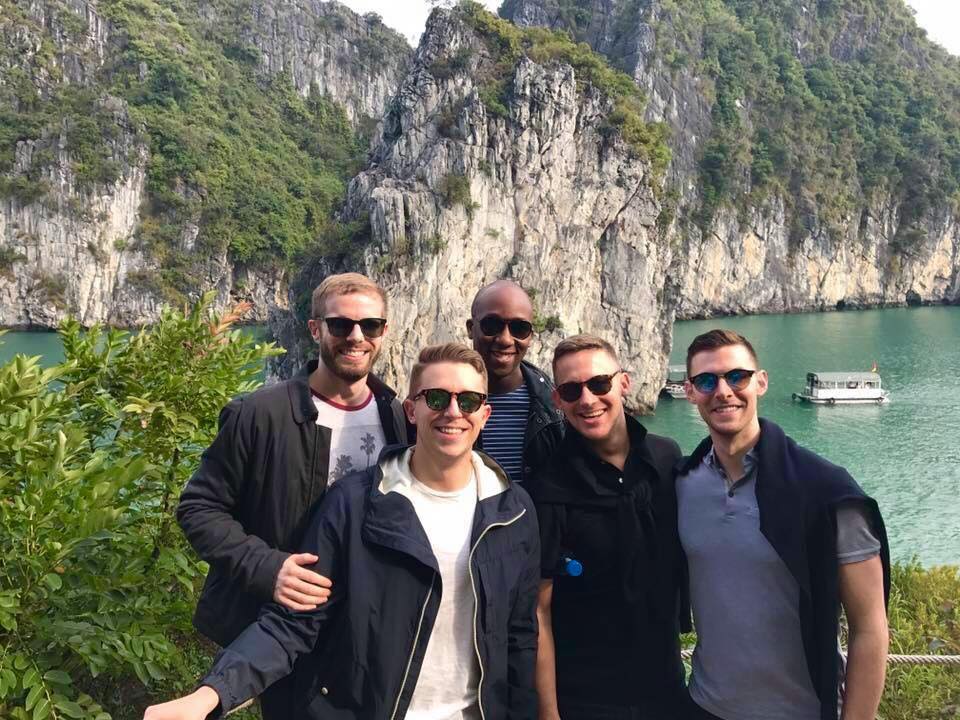 Following lunch, we visited Vung Vieng Fishing Village, a famous pearl-growing town, to view the fishing practices of the local people. We had time to observe the process of feeding pearls as well as learning a little about the life of the local inhabitants. Proceeding to Vung Vieng Floating Village, we boarded bamboo boats, and the local fishermen rowed us around their village and oyster pearl farming plots.

Our butler Bach explained, “These pearls are considered to be some of the best in the world. Despite changes throughout history, the pearl farming village is famous, and is known as ‘The Kingdom of Pearls.”

According to legend, Vietnam was at war, and the Gods sent the Mother Dragon and her children to help the Vietnamese people fight against their enemies. When enemy ships approached the shore, the dragons spat out many pearls which turned into thousands of rocky islands, creating a solid wall to form barriers and block the attacks.

After the war had ended, instead of returning home, the Mother Dragon and her children decided to stay and protect the area forever. She descended to Halong while her children made their home in Bai Tu Long. Their tails created Long Vi, where the white, sandy beach stretch for more than 10 km. Many of the other islands in Van Don District have names linked to the legend, such as Minh Chau Island (Bright Pearl) and Ngoc Vung Island (Glowing Pearl).

For generations, people have viewed pearls as a precious item and a gift a man takes to his fiancée’s house to formalize his betrothal. They are a symbol of his love, strength, and courage. Pearls that are blue in color represent purity; pink indicates sophistication while silver embodies elegance.

The cruise continued smoothly through the labyrinth of karst islands from Vung Vieng Fishing Village to Cong Do (sleeping area). Here, we enjoyed the magnificent beauty of Bai Tu Long Bay at sunset, admired the postcard-like islands and islets, relaxed and indulged ourselves, all the while savoring the peaceful atmosphere which can only be found in this unique place.

As active travelers, we did some kayaking and then took afternoon tea, watching the sky change color as the sun set over the Bay. We enjoyed wine tasting and were given a masterclass by the chef as he demonstrated how to cook a traditional Vietnamese dish. Thibault put his learning to the test and made his very own Spring Rolls which we ate hungrily as the sun made way for the moon.We could not wait for the ‘a la carte’ menu to experience Royal dining in the Can Chanh Palace, a multi-course, sensory experience featuring the best in Vietnamese cuisine. 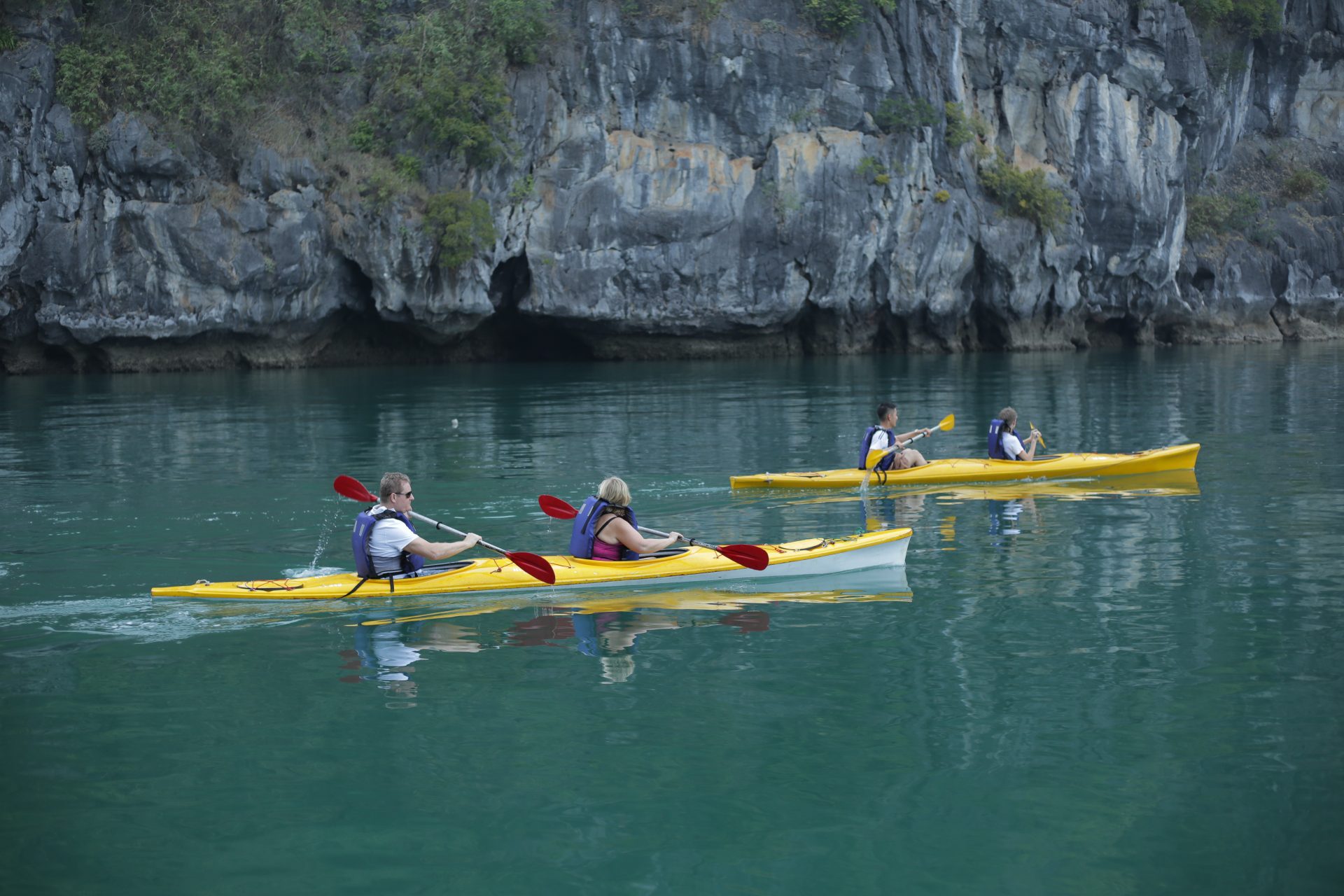 Evening activities on offer included taking in a movie, playing board games, indulging in the massage and spa services, and even going squid fishing. The 1945 bar is located on the lower deck, and we decided to watch the first ever filmed in Halong Bay – l’Indochine. Despite being on a traditional boat, the rooms are fitted with modern 49-inch Smart TV’s, and with popcorn and drinks in hand, we enjoyed the movie immensely. We awoke to the gentle lapping of the water against the boat, as the first rays of sunshine announced a new day. Before a light breakfast, followed by cookies and tea, we tried a VOVINAM class (Vietnamese Martial Arts) on the sundeck as the sun rose slowly over Bai Tu Long Bay.

Exploring the area of Hon Co Island and Co Cave (Grass Cave, also known as Thien Canh Son, the only one cave which opens for visitors in Bai Tu Long Bay), we reveled in the breathtaking view of Bai Tu Long Bay from up high, as well as the glorious white sandy beach at Hon Co Island.

“To date, Ha Long and Bai Tu Long Bays are home to 59 caves, including 23 new discoveries, of which 19 are greeting tourists. The Bai Tu Long Bay covers a total area of 15,783 hectares, including 6,125 hectares of high islands, which is home to 1,909 species of fauna and flora, forming a priceless treasure of the nation.” Said Bach

Afterward, we relaxed on the beach, swam in the crystal clear waters and explored numerous hidden caves. Returning to the cruise by speedboat, we arranged our luggage and begrudgingly checked out. There was still some time to take brunch on board while we cruised back to the mainland. Arriving back at the dock close to Halong City, we disembarked, where our driver was waiting to take us on the next leg of our adventure. 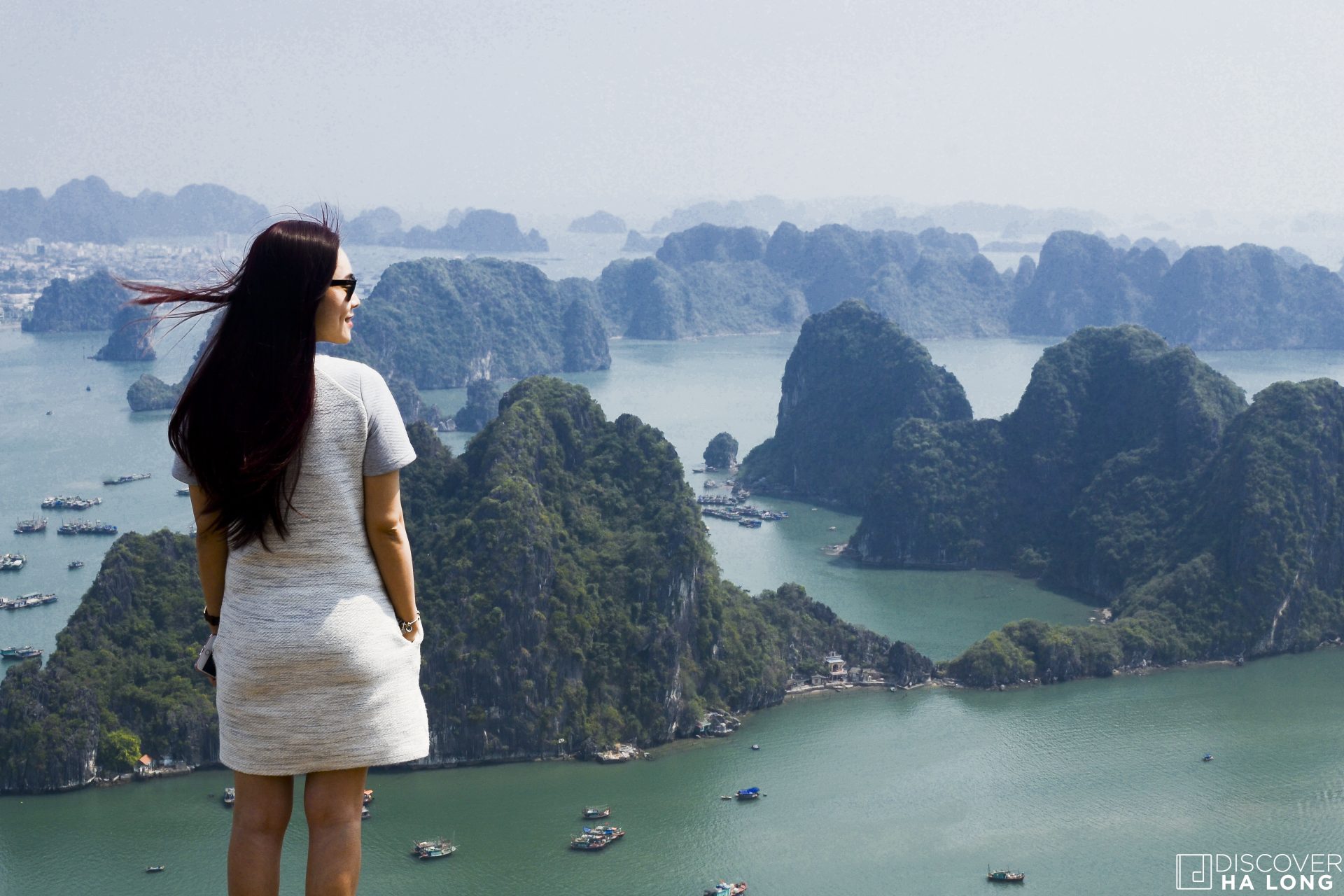 The next destination was  Poem Mountain, formerly known as  “Truyen Dang,” which means “lightning.” According to the legend, the mountain guards were perched here to set a fire that would act as an alarm to the city if they noticed any invaders approaching. In the spring of 1468, when King Le Thanh Tong patrolled at the Northeast Sea, his boat stopped at the foot of Truyen Dang Mountain. Touched by the charm of the natural beauty, the poet, King Le Thanh Tong etched a  56 character Chinese poem on a flat rock, about 2.5m above the ground. Since then, the mountain has been called Poem Mountain and has become an oft-visited site of significant national importance.

Finding the entrance to the mountain path without the guidance of our driver was difficult, but climbing Poem Mountain was one highlight that we just had to cross off on our journey of discovery. Upon reaching the peak, we admired the beauty of the bay from above and took in the vast green sea and undulating rocky islands. I waited impatiently for dawn to witness the magnificent sunset. Here lies a beauty that is almost indescribable; the clouds and sky combine into one, covering the entirety of Halong Bay with vibrant and warm colors that seem to have been painted by God himself.