When traveling to Halong, it is recommended that you should not miss the famous seafood of the region such as Deep-fried Squid Balls (Chả Mực), “ngán.” However, Halong also has another rare, tasty and nutritious sea specialty that is often unknown to visitors and is definitely worth a try. Sam Biển (horseshoe crab) comes from Quang Yen, the most famous seafood region of Halong and it is known for its production and processing of horseshoe crab meat. 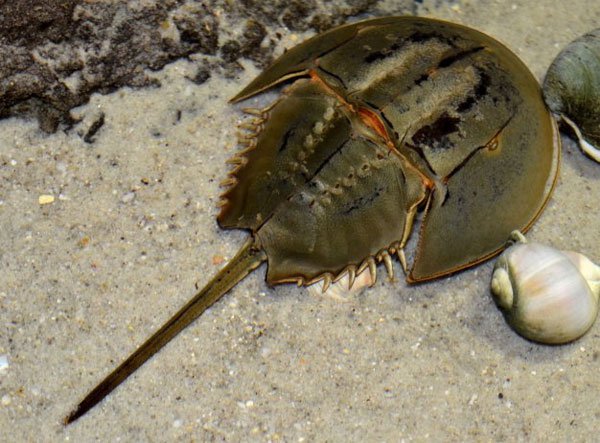 Sam Bien lives among the inshore bays and saltwater lagoons. Its name means “the crab with a horseshoe shape, and it shares features and anatomical structures from both the crab and spider families. Compared to shrimp and other shellfish, Sam Bien is much cheaper but equally delicious.

Used in a lot of local Vietnamese dishes, is not particularly difficult to harvest. To find it, fishermen must calculate the exact tide level and go out to sea at just the right time. The crab is usually found in pairs (one male and one female), so two are caught together in the fishing hauls. If the fishermen catch only one crab, they typically return it to the ocean.

Horseshoe crabs can only survive in the natural ocean environment, and cannot be farmed like many other shellfish species. After being brought to shore, it will only survive for around three days, and so, is sent to restaurants immediately to be served as a horseshoe crab dish.

The preparation of the crabs requires three tools; a pointy knife, a cutting knife and a pair of scissors to cut the legs, scoop out the meat and remove the intestines and liver (these parts contain colic pathogens).

Horseshoe crab dishes are often served with sour and hot spices such as galangal, lemongrass, chili, vinegar; wild betel leaf, green onion, coriander, and dill. Grilled crab and sweet and sour crab seem to be the two most popular dishes preferred by tourists. Grilled crab is very flavorsome, and the meat is cooked and smoked upon a charcoal flame until the golden, aromatic flavors are released. The sweet and sour version is characterized by a sharp and relatively spicy taste with the sweet and salty aftertaste of the sea. 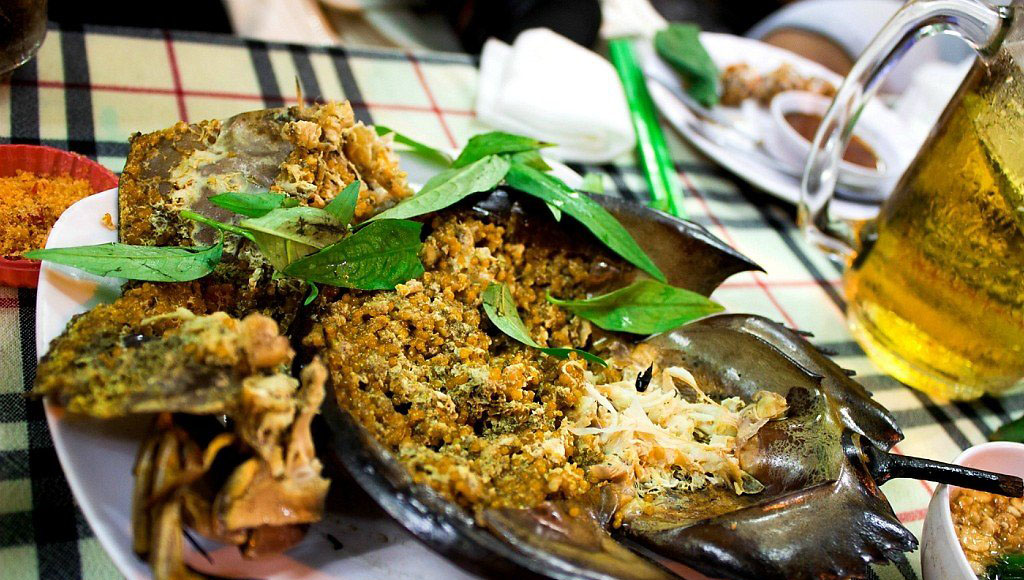 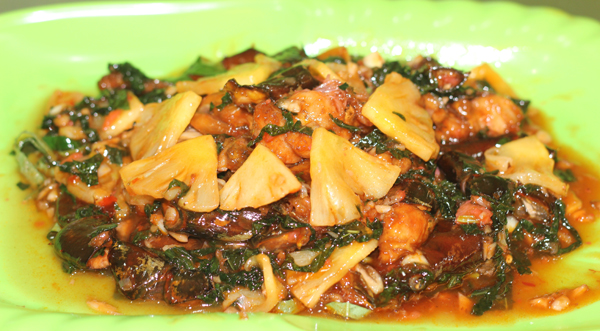 The sweet and sour Horseshoe crab

Known for its regenerative powers, the horseshoe crab is used extensively in creating medicinal products for both humans and animals while the shells are made into souvenirs for visiting tourists.