Today, according to archaeological research, Halong is still a symbol of the ancient Halong Culture.

Van Don, now belonging to the Van Hai Archipelago, lying in the south east of Halong Bay, located on Bai Tu  Bay, was considered by Nguyen Trai to be a wonder of the country which has very beautifully depicted in his writings. 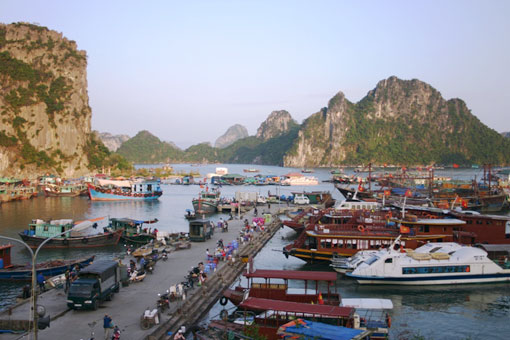 In “The complete History of Dai Viet”, he writes “In the Ky Ty year, the 10th year of Ly Anh Tong reign (1149), the second lunar month, Javanese and Siamese merchant ships entered the East Sea for trade. They were concentrated in an island area, called Van Don, for trading precious goods, and presenting local products”

Quan Lan: Island of ruins had plenty of offer

These days sleepy Van Don Island may seem like it is being left behind by a rapidly-changing world. However, the locals will be only too happy to tell you of a time when the island occupied center stage in the nation’s history. This unassuming community on the perimeter of picturesque Halong Bay in Quang Ninh Province has a glorious heritage. It was the country’s first international commercial sea port in the 12th century, and the site of the first successful naval battle against foreign invasion in the early 13th century.

Now, it is hoped that the island’s dramatic past, coupled with its unspoiled natural beauty, will make the island a place of action again, this time as a prominent eco-tourism destination. A joint venture has ambitious plans to offer a tour of Van Don’s pristine wilderness, where tourists can stay in stilt houses, swim, scuba-dive and trek through the forest to see the ruins of the old port.

Food abundant out there
If you ask the islanders whether they have any plans to increase their meagre incomes, they will look somewhat confused. There is plenty of food on the island, they reply – it’s there for the taking in the wild. But apart from the abundant food supply, the island’s residents seem blissfully unaware that they are living on a veritable gold mine. The island is rich in a number of resources that are only just starting to be developed.

The vast stretches of white sand dunes along Van Don’s coastline are one example. The sand is now being used for the crystal and glass-making industries. 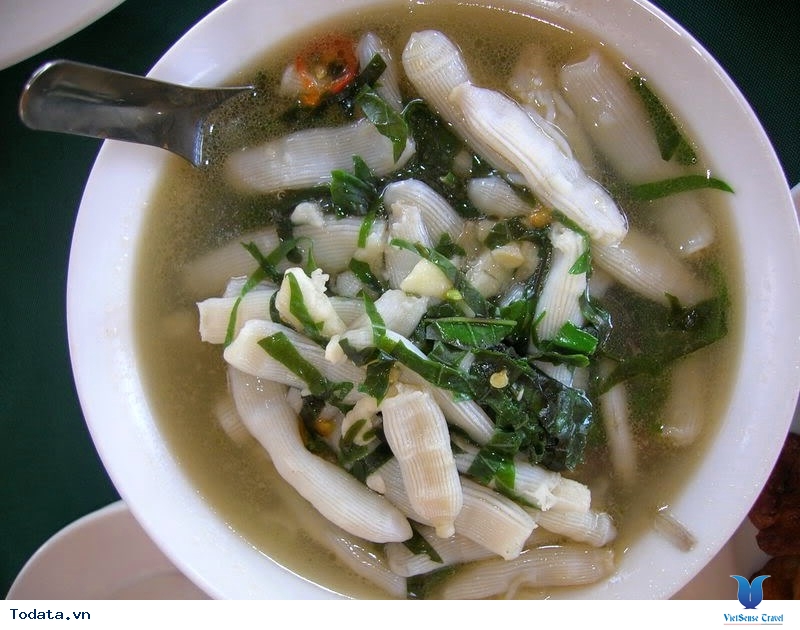 Just below the sand lies another source of wealth: sea worms. These dried worms fetch up to VND500,000 per kilo on the nearby Chinese market. Hunters require just a shovel and a bucket in order to rake in a comfortable living.

With an area of only 60 sq.km, space to farm on the island is scarce. Locals have adapted to the conditions as best they can, and the island is now a patchwork of terraced lots slotted in amongst limestone mountains and beaches. Here, residents grow wet rice, vegetables and cash crops such as ground nuts, tea, and sweet potatoes.

However, it is the sea that truly provides the key to the heart and soul of this island people. Their bond with the water is never far from their thoughts – or their stomachs.

Fresh seafood abounds on the plates of local residents, and even the island’s main rice supply comes via the ocean. This is not some strange variety of sea rice, but the genuine article from the Cuu Long (Mekong) Delta. Since many islanders work on boats, they often cast anchor in southern ports and buy up on food and other products.

The islanders are able to watch the World Cup via satellite television, or talk to their friends and families on their mobile phones, but when it comes to food for the soul, local history remains the main dish on the menu.

Dialects unchanged
No-one knows when people first arrived on the island and settled in the two villages of Quan Lan and Quan Chau. However, many locals are able to recite by memory long stories about the island’s past, in which two events stand out.

The first was when Van Don shot to prominence in 1149, when King Ly Anh Tong (1136-1175) allowed three foreign ships to moor off the island. In doing so, he created Vietnam’s first international commercial port.

The second significant event was also closely connected to the island’s strategic location.
In 1288, General Tran Khanh Du (-1339), a renowned noble, was posted at Van Don garrison as its deputy commander. When an invading Yuan-Mongol naval fleet got past the Van Don base, King Tran Nhan Tong (1258-1308) was furious. Du was arrested and sent back to the capital city of Thang Long (now Hanoi) for punishment.

However, Du was so remorseful that the king agreed to give him a second chance. Du then ambushed the Yuan fleet as it transported food past the Van Don garrison. The whole convoy was destroyed, the Yuan troops were either killed or captured, and all food supplies for the advancing army were lost.

Du’s exploit was the crucial curtain raiser for a second naval ambush, this time 80 miles south at the estuary of Bach Dang River. The resulting Vietnamese victory wiped out the entire enemy fleet, and brought about the end of the Yuan invasion.

Van Don’s bustling maritime scene, coupled with the famous naval exploit, caused many shrines and temples to be built in commemoration of General Tran Khanh Du and his close associates, the three brothers of the Pham family.

A sea-change in fortune
Locals cannot remember the exact time in the Tran Dynasty when the last ship left the dying Van Don commercial port for Pho Hien, a booming port on the bank of the Hong (Red) River, some 50km south-east of Hanoi. This dramatic reversal in fortunes was brought about by the changing sea current, which caused the lagoon and its waterway to fill up with silt.

Visitors to the island can still see the vestiges of its colorful past.

Scattered amongst the ruins of the commercial port is the 17th-century Quan Lan Village Temple, said to be one of the biggest in north-east Vietnam, and many other smaller places of worship.
These structures were all shifted when Quan Lan residents relocated to the present-day village, about 8km from the old port on the other side of the mountain.

Pham Quoc Duyet, the Quan Lan Village official in charge of culture and information, said that the temples and shrines are only the tip of the iceberg as far as the village’s historical value is concerned. Visiting archaeologists are even more intrigued by what still remains beneath the earth at the old port.

Duyet guided me to the old port where he showed me a place full of broken ceramics and pots among the sand dunes on the water’s edge.

Duyet said many families had dug up old ceramic pieces, loaded them in boats, carried them home and used them to cement their floors. Others excavated the site and found many intact ceramic pots from the Tran Dynasty. 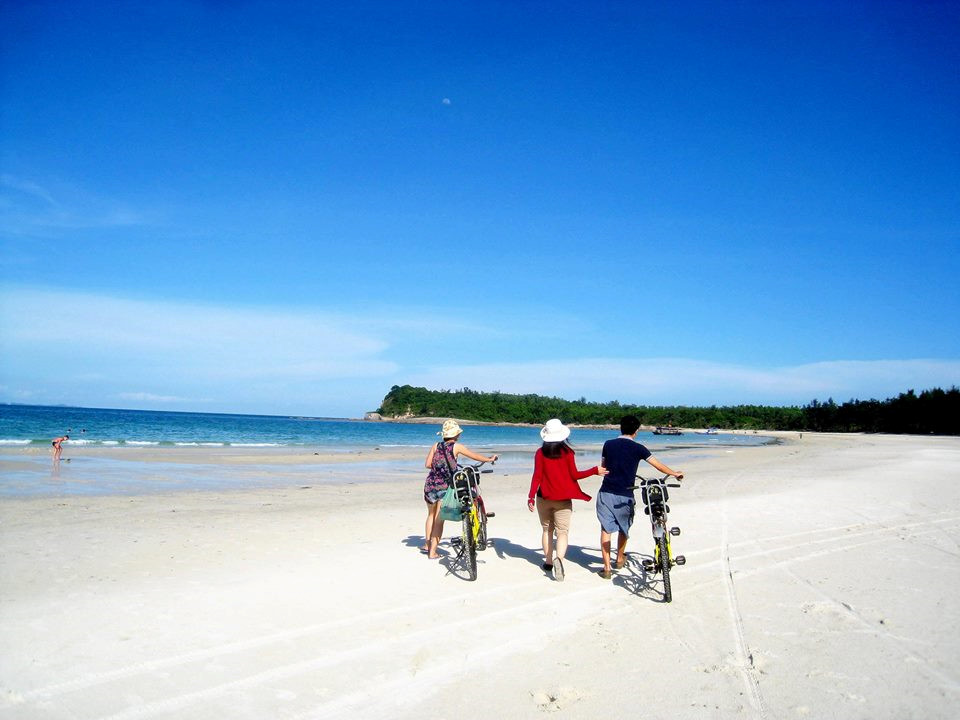 There are still some people who live in their old family houses in the former Quan Lan village. They do not want to abandon the memories of their ancestors for mere modern conveniences. Their solitary life among the ruins underpinned by a belief that it is not right to look only to the future while ignoring the past.

Duyet added that most of the pagodas and temple and shrines in Quan Lan have been classified by the State as historical relics. However, so far attempts to get the State to recognise the entire area of ruins as Vietnam’s first commercial sea port have been unsuccessful.