The Symbol of Vietnam

The elegance of the lotus flower is often cited in the Vietnamese folk songs and poems, and it is depicted beautifully in many arts forms. To the Vietnamese, the lotus is known as an exquisite flower that symbolizes purity, serenity, commitment and optimism towards the future. It is a flower which grows in muddy water and rises above the surface to bloom with remarkable beauty while every part of the plant is eaten in Vietnamese cuisine. The Lotus in Asian culture
Appearing in many legends, the lotus is looked upon as a symbol of divine beauty. In Asian religions and cultures, especially, Buddhism and Hinduism, the lotus flower is the embodiment of perfection. The magnificent lotus flowers emerge from the dirty and murky bottom of a pond, and yet remain untouched by all the dirt and mud of the environment in which it grows. This unique quality of the flower is believed to represent the pure spirit.

Usually found in five different colors; white, red, blue, purple and pink, each kind of lotus flower has its own meaning. The white lotus is said to denote purity of the mind and spiritual perfection. The red lotus, on the other hand, stands for the heart and hence, symbolizes love, passion, compassion and the qualities akin to the original nature of the heart. 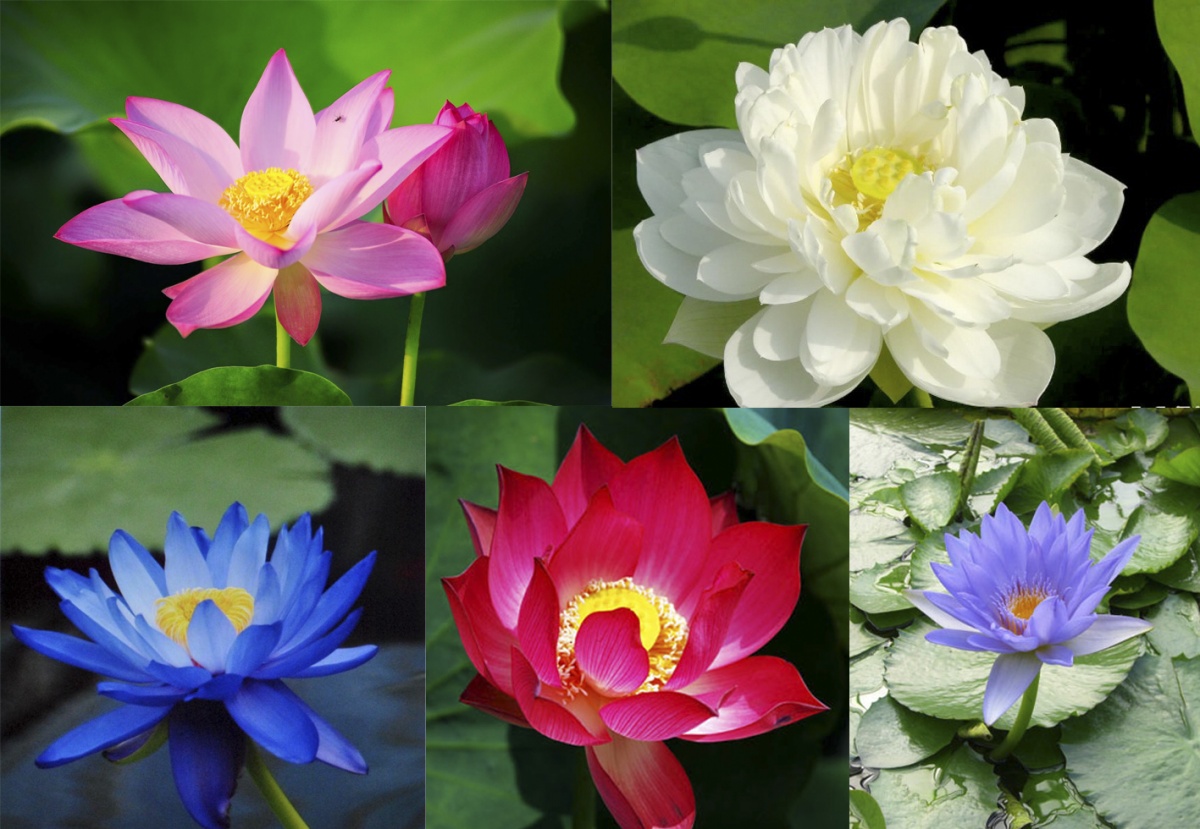 The blue flower signifies wisdom and knowledge, and stands for the victory over the senses. The purple lotus is the mystic lotus, representing the esoteric sects while the delicate pink lotus is considered as the pinnacle of all lotuses. This is the reason why, the main Hindu Gods and Goddesses, and also ‘Buddha’, are often depicted sitting on a pink lotus.

The Pink Lotus – Vietnam’s National Flower
The people of Vietnam regard the lotus as one of the four graceful flowers and plants, along with the pine, bamboo, and chrysanthemum. Known as the “flower of dawn,” the lotus is found throughout the country at lakes and ponds. To the Vietnamese, the lotus is the symbol of purity, commitment and optimism for the future.

At night, the flower closes and sinks under water before rising and opening again at dawn. The way in which it blossoms and recedes at certain times of the day allows the flower to remain untouched by impurity. Thus, the lotus symbolizes the purity of heart and mind. And just like the lotus, Vietnam has a strong affinity with the water.

From history to present, Vietnamese farmers work in the paddy fields while fishermen make their livelihoods from the rivers and streams. Vietnamese civilization sprung from the Red River Delta, where wet-rice cultivation along with fishing and rice planting was the mainstay of living. 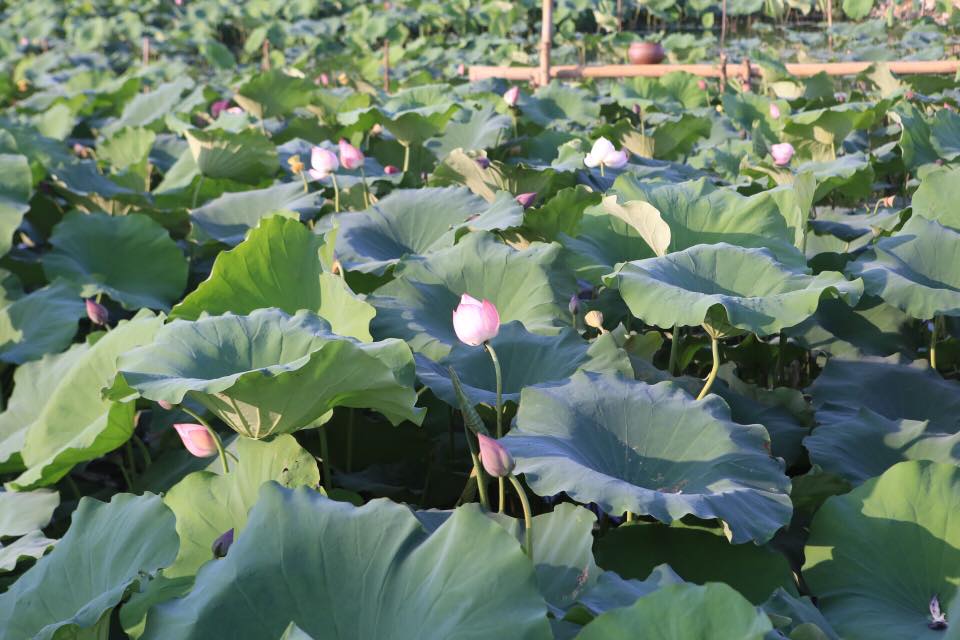 One interesting research reported that the lotus has the remarkable ability to regulate the temperature of its flowers to within a narrow range, just as humans and other warm blooded animals do.

Such is the Vietnamese love for the lotus that it was voted as the country’s national flower, for which one of the criteria was that it “must be found in many localities”. It would be hard to travel through Vietnam during lotus season without coming across a pond or lake filled with them.

Professor To Ngoc Thanh, a member of the Advisory Council on Vietnam’s National Flower, was quoted in an interview quoted by Vietnam News as saying, “As I understand, India and Sri Lanka have also chosen the lotus as their lotus national flower, but theirs is the white lotus, while we prefer the pink lotus flower. Our lotus represents the noble mind and pure spirit of the Vietnamese people, and is the best symbol to characterize Vietnam.”

Some brands including the national carrier, Vietnam Airlines, use the lotus as their official logo.

Lotus Season
In June every year, pink and white lotuses blossom everywhere in Vietnam, from lakes and ponds to temples. The most popular places with lotus flowers are West Lake in Hanoi, Tinh Tam Lake inside the Imperial Palace in Hue, and the Mekong Delta province of Dong Thap.

Seeing a lotus, people often feel as if their entire body and soul are purified by the subtle fragrance of the flower, and is an ever-present part of local people’s lives. The elegance of the lotus is often cited in the Vietnamese arts, folk songs and poems. You can admire some beautiful lotus artworks by the artist Pham Luc, in different areas aboard Emperor Cruises and Emperor Lounge. Lotus in Cuisine
In addition to its delicate beauty, lotus plants also play various roles in Vietnamese cuisine. Young lotus stems are used as a salad ingredient, and the stamens can be dried and used to impart a fragrant scent to tea leaves.

Lotus seeds can be eaten raw or boiled until soft and made into a paste, or boiled with dried longans and rock sugar to make a sweet soup. The bitter tasting germs of the lotus seeds are also made into a tisane.

Dishes made from lotus seed are considered a cure for some common ailments such as insomnia. The sweet soup is particularly tasty, and you can sample a delicious longan lotus seed soup for dessert aboard Emperor Cruises Halong or street food shops in Hanoi old quarter .

Flowers in the street and ponds:
There are four large ponds around the banks of West Lake brimming with lotus flowers. One is near the waterpark and the other three are along the northern bank. If you walk or take a bike ride around the lake you can’t miss them.

In early morning, young ladies push off in their boats to cut the flowers to sell them later that day. As the city comes alive, young lovers and groups of girls dressed up in traditional Ao Dai scoot along to the ponds for both professional and amateur photo shoots. 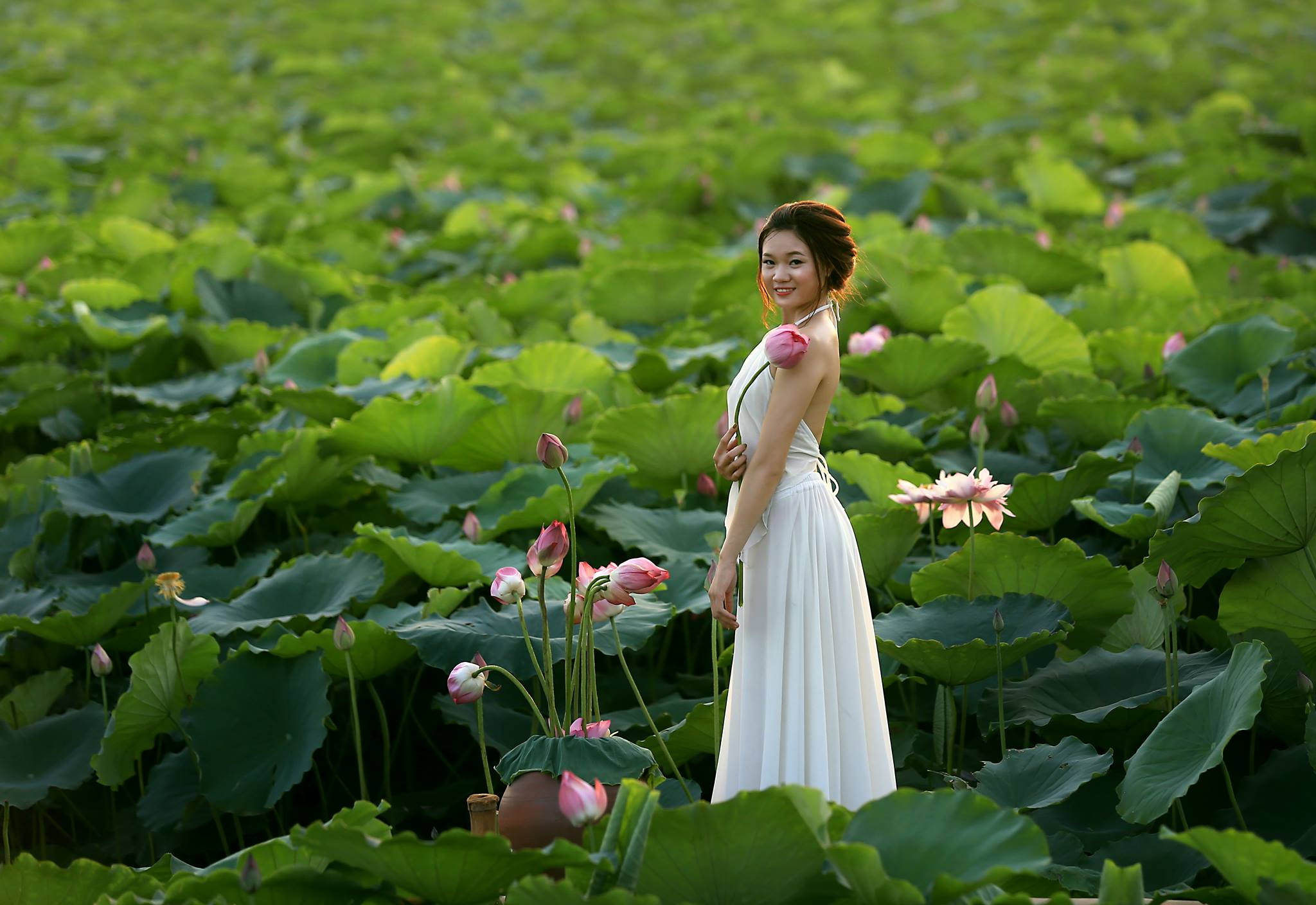 Enterprising land, or pond owners have put up bridges jutting out into the ponds and charge for the privilege of taking photos on the bridge or offer jaunts on small boats amongst the flowers.

The white and pink flowers are most commonly seen in the ponds and streets of Hanoi, with pink being considered the supreme of all lotuses.

Flower vendors can be found selling bunches, wrapped in a lotus leaf, from bicycles all around the city, particular at the western end of Yen Phu or along Phan Dinh Phung Street, which makes for a wonderful photo opportunity.