After more than a decade of success has the head of Vietnam’s first luxury tour company, Pham Manh Ha ventures into the sea with an ambitious cruising service that is inspired by the opulent life of Emperor Bao Dai. Known as the last Emperor of Vietnam, the name Bao Dai means “the keeper of greatness”.

Great vision, good communication skills, emotional intelligence, and flexibility are characteristics that can be seen in Pham Manh Ha. In person, he looks much younger than 42 years, with a youthful appearance and short salt and pepper hair.

“Artist Pham Luc painted this artwork exclusively for me during his first cruise in Vietnam”, explained Ha, as he presented an imposing artwork of King Bao Dai, framed in wooden oak, and hanging at the Can Chanh Hall on Emperor Cruises Halong. The piece, created by renowned artist Pham Luc, is just one painting created during a decade-long friendship between him and Ha. Pham Luc is now 74 years old, but he still produces impressive quantities of new work from his base in Hanoi. Each artwork aboard Emperor Cruises cost several thousand dollars, and they are hung all over the ship.

The inaugural cruise of the ship took place on 22nd March of this year, attended by a group of eight VIP guests that included the Prince and Princess of Lebanon. “To create Emperor Cruises Halong, we invested about half the cost of Emperor Bao Dai’s Rolex”, mused Ha. The Rolex reference relates to the 6062 model watch that was once owned by the last Vietnamese Emperor, and was sold at a Swiss auction for $5,060,427 in May of this year. The investors consist of Ha, and his best friend and business partner, Duc Long. Together, they contributed the capital to form Emperor Cruises, which operates both in Nha Trang (started in April 2015) and in Halong Bay (at a 50/50 capital ratio). 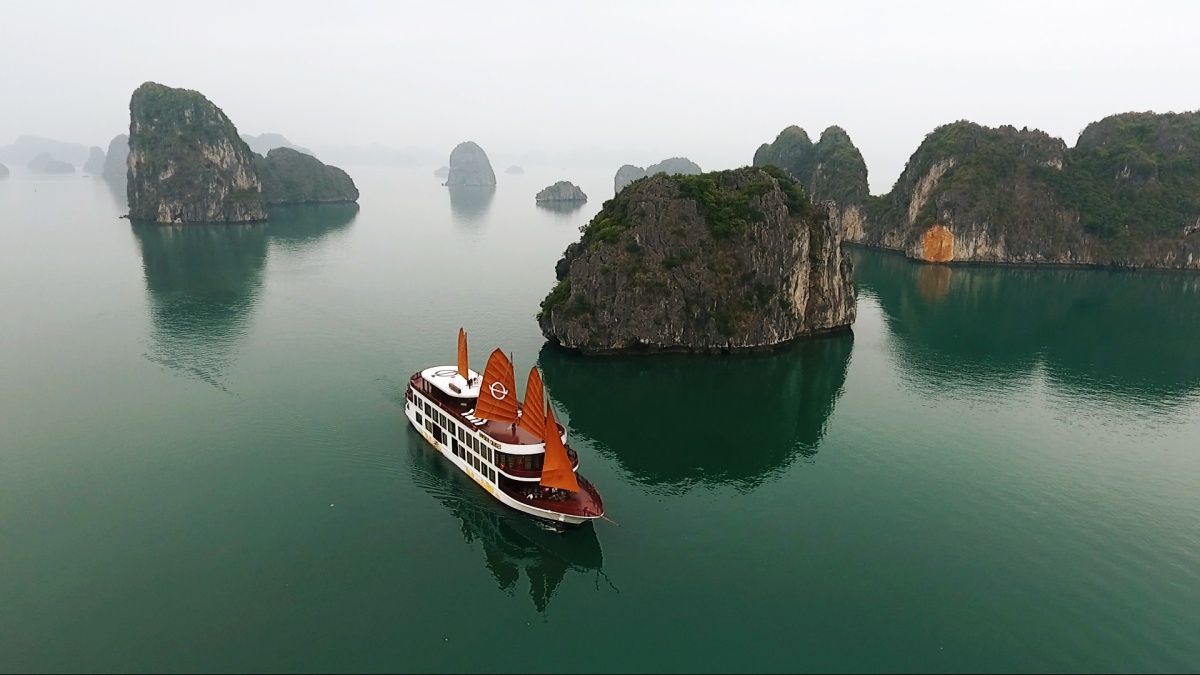 The cruises operate both a day cruise and sunset cocktail and dinner experience (the ship has not yet begun overnight services because Ha is still in the “exploration and market research” process). “My goal is to gradually build maritime connections from North to South, with each destination offering a stay of two or three nights,” he confided while enjoying a bottle of Escudo Rojo (Baron Philippe de Rothschild) during a ‘à-la-carte’ dinner that included grilled salmon and lobster. Ha asserts that there is no cruise on Halong Bay which serves the type of cuisine found on Emperor Cruises.

“When I was 12 years old, 10 years after the reunification of North and South Vietnam, my father and I were on a journey on a big cruise ship (donated by the Norwegian government) from Hai Phong to Ho Chi Minh City. The ship was very big, and I saw the tremendous beauty of my country. It was at this moment, I knew what I wanted to do in the future”. So, Ha and Bui Duc Long, himself the director of the Huong Hai Cruise Company (Quang Ninh) decided to create their own cruise business. At first, Ha chose Nha Trang because Halong already had too many cruise operators, but eventually, he decided to take a gamble on Halong Bay – the beautiful natural wonder of Quang Ninh, a must-see destination for all visitors to Vietnam. 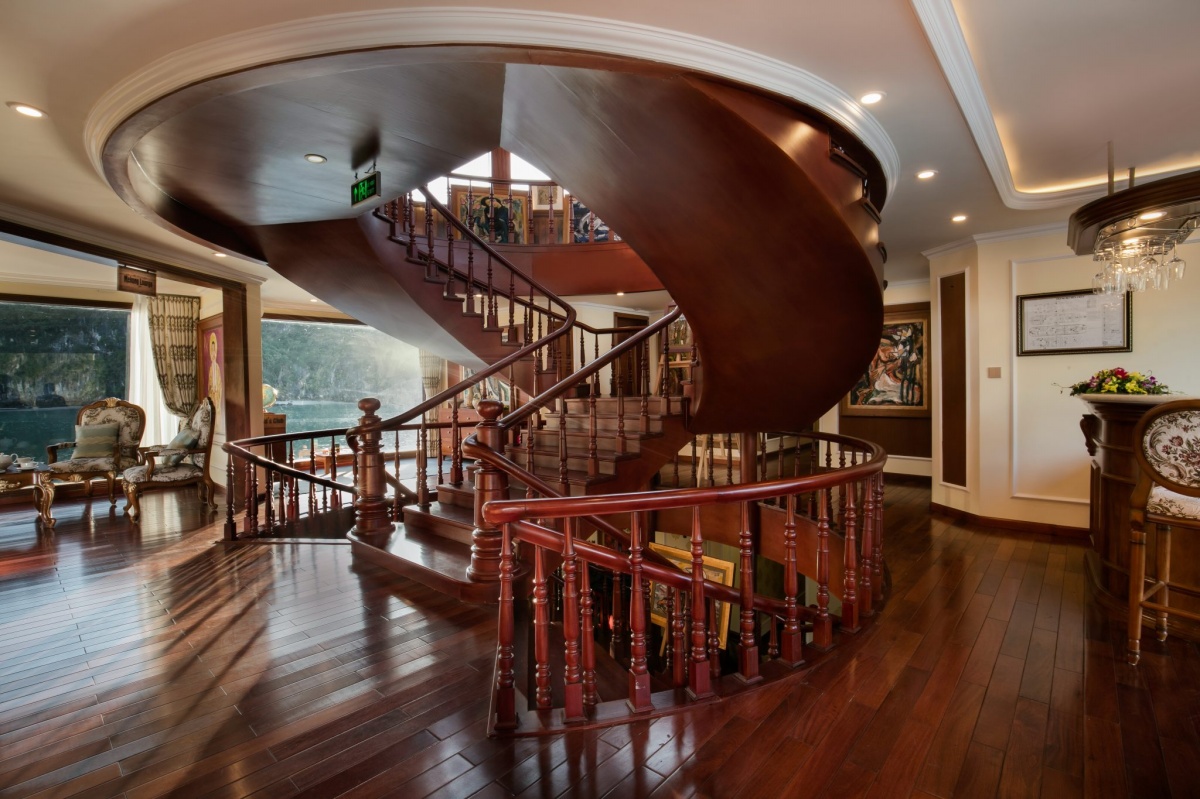 Ha has a great passion and curiosity for the life of Emperor Bao Dai, and is the author of a book in English about the secret life of the Emperor (each room on Emperor Cruises displays a copy). In 1997, he was a guide for the film director Tran Anh Hung and his film crew. He took them to Cua Van Fishing Village for 2 months during the filming of the movie “The Vertical Rays of Sunshine”.

“Emperor Bao Dai had villas and palaces in Hai Phong, Hue, Nha Trang, Vung Tau and many other localities. With Emperor Cruises, visitors can follow in his footsteps and travel the routes he took while discovering the most beautiful places Vietnam has to offer”, Ha explained.

Having received a degree in Business Administration, Pham Ha (the “commercial” name of Pham Manh Ha) speaks two foreign languages fluently and enjoys chatting with guests. “I just upgraded their room for free,” he mentions, after spending some time speaking to a French family and their young daughter. “They told me they have traveled a lot, and taken many cruises around the world, but have never been in such big suite on any cruiser in the world,” he said. Indeed, luxury travel is the expertise and know-how of Ha, and he is the founder and CEO of Luxury Travel Ltd. It was the winner of “Vietnam’s Leading Tour Operator 2016, and a nominee in the awards for four consecutive years from 2014 to 2017. Most recently, it was nominated in the luxury category as “Asia’s Leading Luxury Tour Operator 2017”.

Emperor Cruises on Halong Bay can accommodate 16 to 24 passengers. The price of a two-day / 1-night package for two people is priced from $830 for the Signature Suite, and $2,260 for the King and Queen Suites. Each en-suite cabin is equipped with a two-way air conditioner, a comfortable bed, and a luxurious bathroom. The experiential cruising journey includes activities such as a tea ceremony, unlimited spa services, morning Vovinam exercises, and activities such as kayaking and visiting the fishing villages on the bay. “Everything is included in the price”, notes Ha. “We aim to provide an exclusive, all-inclusive experience with a private butler service and limos from Hanoi. Our guests don’t need to pay for any of their service requests on the boat. We treat them like kings, and if you are a king, why do you need to pay?” he joked, as we opened our second bottle of wine.

One of the many difficulties in the cruise business is the human resource problem, and Ha admitted that it is his biggest challenge. “Demand is high but supply is low, and the quality of human resources required for the “luxury” market is more difficult to find”. Ha is fortunate to have a passionate, dedicated and qualified team. “Our cruise director, 30-year-old Lo Cong Quy, is always ready to go kayaking with passengers, and our chef Dong Van Xom, goes the extra mile and serves dishes that are not on the menu, so we can meet every passenger’s needs at any time of the day”, he said.

“I am happy to see that Vietnamese travel businesses are now investing in luxury tourism”, quoted by Forbes Vietnam as saying said Francesco Galli Zugaro, CEO of Aqua Expeditions based in Singapore, and operator of luxury boat tours on the Amazon and the Mekong Rivers. “This shows that the Vietnamese tourism market is very promising regarding this service type, and it will create more unique experiences to help the country compete in the international market,” he concluded. 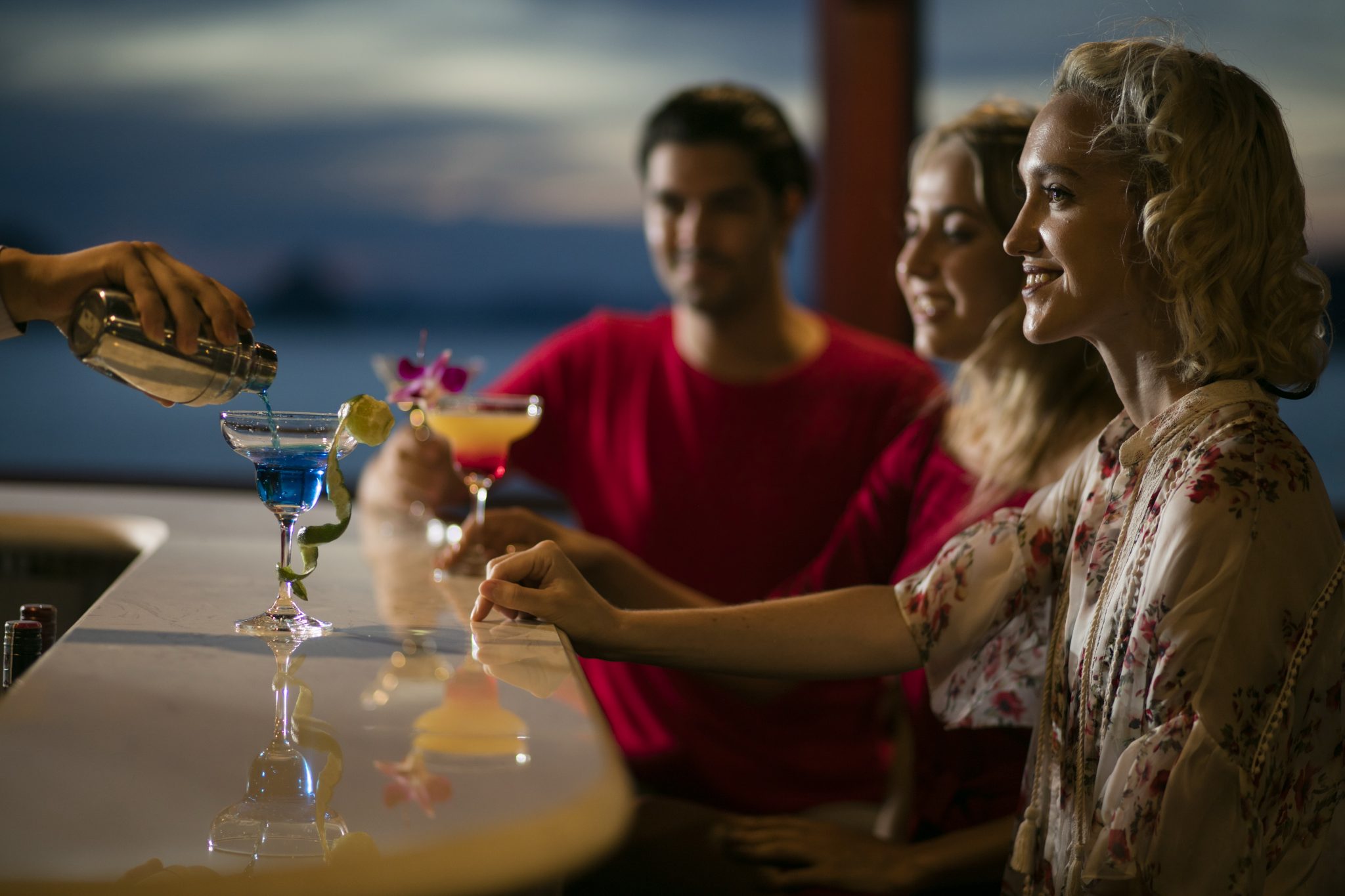 Happy clients on the luxury cruise in Halong Bay

“With Emperor Cruises Halong, I hope a return on investment within 3 years. It is quite a fast ROI, as it can often take 4 years or more. In Nha Trang, we expect a ROI by year 5, because it is a new product in a new cruise destination.” Ha reveals. “If Vietnam wants to compete with neighboring countries and become more appealing to luxury travelers worldwide, it must do two things urgently,” says Mr. Zugaro. “Firstly, visa waivers must be applied to the main markets for Vietnam tourism. Secondly, the Vietnamese government should make favorite investment conditions to 100% foreign-owned travel companies who want to invest directly in Vietnam without entering into a joint-venture with a local partner.” 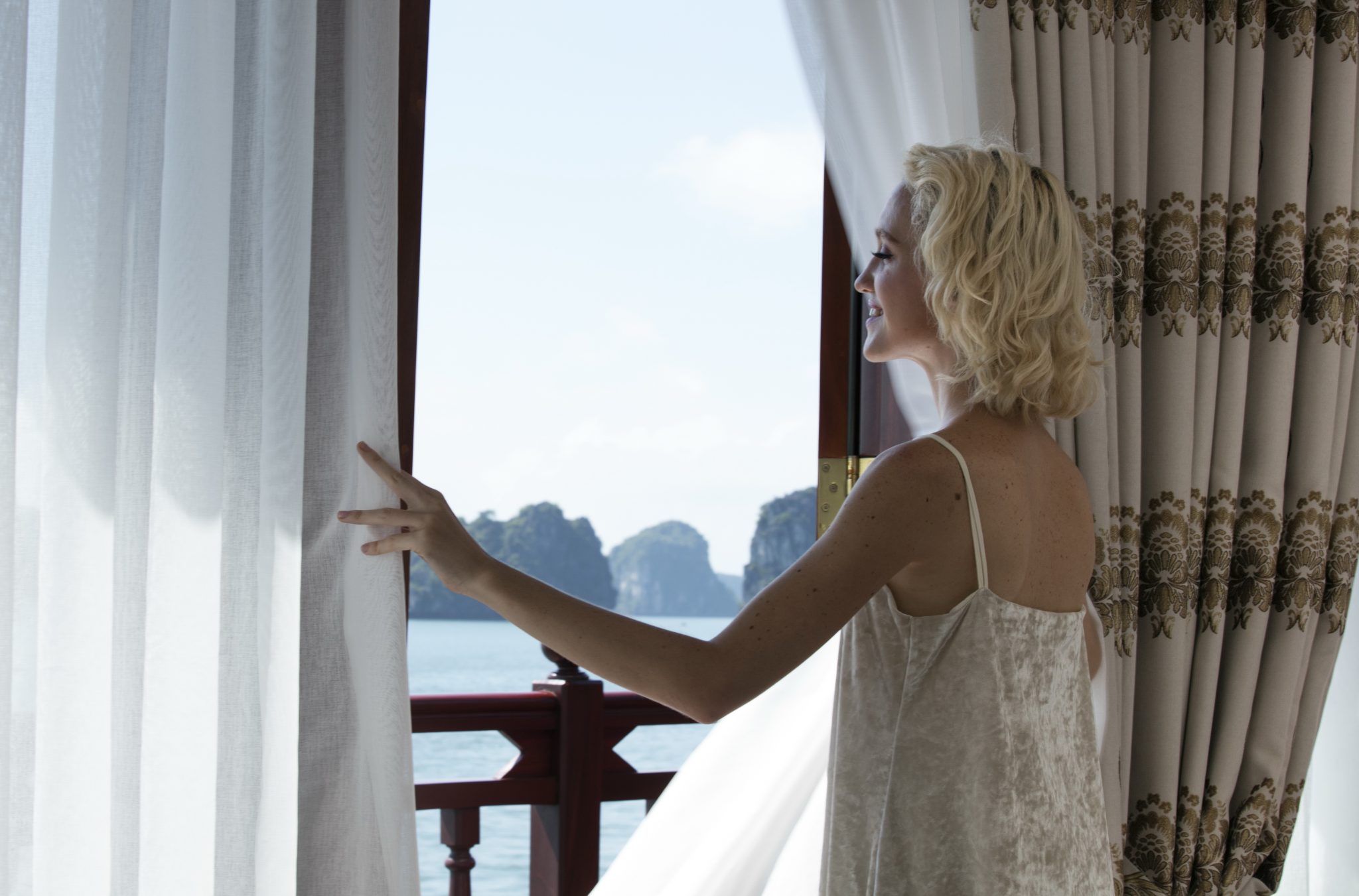 Recognizing that cruise tourism is a special niche tourism product, and a way to highlight and differentiate Quang Ninh from neighboring provinces, Mr. Trinh Dang Thanh, Vice-director of Quang Ninh Tourism Department, emphasizes the importance of managing and controlling the quality of this type of travel. This is to ensure maximum safety for visitors and to avoid an unbalanced development of cruise ships on the bay. “I know I have a lot of work to do and many obstacles have to overcome,” he said.

Pham Ha left us with his plans for the business future of his kids. “I will not leave much money for my children because when I was young, I didn’t have even a thousand dollars to begin, but I was still able to make my own career. So, there is no reason why my children who, armed with the best education, cannot do it too.”