Bao Dai (Nguyen Phuc Vinh Thuy) was the last Emperor of the Nguyen Dynasty and the last ruler of the Vietnamese monarchy. Artist Le Pho was one of the people invited to the palace to paint portraits of King Bao Dai and Queen Nam Phuong. The paintings and information about the ancient royal customs will be display for the pleasure of guests on Vietnam’s first ever art cruise in both Halong Bay and Nha Trang.

Inspired by the lavish lifestyle of Emperor Bao Dai, Emperor Cruises is a masterpiece which is designed to reflect the style of the 1930s. It is a place where the most sophisticated of travelers can enjoy Vietnamese art, culture, history and gourmet cuisine, and where royal glamour and heritage combine to create the epitome of elegance.

The Phoenix robe of Queen Nam Phuong and Emperor Bao Dai’s Dragon dragon robe will be on exhibit on Emperor Cruises Halong Bay. These great historical works have been restored by the artisan, Vu Van Gioi.  He is an expert in the restoration of ancient clothing such as the dragon robe of The Nguyen Dynasty. 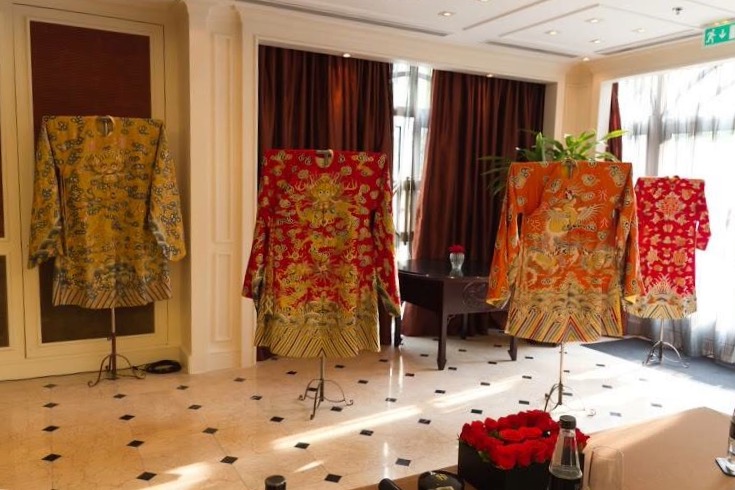 “The dragon robe weighs about 6kg, complete with up to 1kg of gold. The King’s shirt is adorned with gold leafing and real pearls. “A dragon robe has about 6,000 beads, explains Vu Van Gioi.

Heaven and earth on a dragon robe

Vu Van Gioi discovered many interesting things in the process of restoring the King’s dragon robe. For example, the dragon robe must have nine dragons; the dragon in the middle of the chest is the biggest dragon and is displayed at the front to signify power. A total of 3 dragons on the front, three on the back, one on the front flap and the last on the inside flap complete the nine dragon motifs.

Each robe must always contain sufficient elements of heaven and earth, and so it is embroidered with imagery related to the sky, sea and land. The fabric and materials used for sewing the King’s hat, shirt and shoes were often purchased abroad, and were accentuated with gold, silver, pearls and diamonds to add more value and majesty.

Speaking about the process of restoring the King’s dragon robe, artisan Vu Van Gioi said: “This kind of outfit requires meticulous, rigorous, and proper attention to every little detail such as choosing the silk, weaving the fabric, dying the colors and embroidering.” To understand the style of ancient royal costumes, one can see its evolution through historical records, patterns, and motifs on the old stone monuments, temples, and pagodas around the country.

The dragon robe was dark yellow, and the body of was embroidered with motifs such as dragons, the sun, the moon, stars and mountains. The flap was stitched with dragons, clouds, water and waves while the sleeves were finished with bats and dragon imagery. The fabric and stitching thread needed to be done in silk, with the color neither shiny or easy to tarnish. Every societal class used a different kind of embroidery thread to sew the robe. The King’s robe was sky blue and yellow; the empress wore purple, red and pink whereas the price wore a garment of pure yellow. Each costume had strict regulations about the distance between motifs and buttons and was created by some of the country’s best tailors. Even the most simple of robes needed four tailors working for up to five months.

Halong Emperor Cruises is inspired by the luxurious lifestyle of the last great ruler, Emperor Bao Dai. The boat itself is a trip down memory lane to the 1930s: rich in the HISTORY, DESIGN, and HERITAGE of his life. Emperor Cruises purpose is to ensure that you experience every moment with us by being treated like kings and queens, indulging in experiences such as music, fine arts, architecture, culture, fine cuisine, history, and outdoor activities.

In the North of Vietnam, travelers can visit one of his six magnificent villas in Do Son, Hai Phong. Do Son is just a few hours by boat from the famous Halong Bay. Emperor Bao Dai used to stay here for vacations and to relax with his family between 1933 and 1954, when he was Emperor of Annam and Chief of the Vietnamese State.