Ca trù is inscribed on the list of intangible items of value to Cultural Heritage.

While cruising on Halong Bay, Anita Sach, a British passenger gazed attentively at an oil painting hanging on board  Emperor Cruises Halong – the first ever art boat in Vietnam. Entitled Ca Chu, it was created by the revered Vietnamese artist, Pham Luc.

“Paintings by Pham Luc are attractive due to liberal lines and strange color tones which arouse much emotion in viewers, especially the paintings that feature Vietnamese characters, and this makes them resonate with Vietnamese people.” said Anita.

Related to and inspired by the story of Emperor Bao Dai (the last Emperor of the Nguyen Dynasty), whose lavish lifestyle often included cruising around the waters of Vietnam, Pham Luc’s art reflects Vietnamese heritage as seen in Ca Tru. There are many different myths and theories regarding to Ca Tru’s conception. One story suggests that a woman named Ả Đào created the genre, after having charmed her enemies with her voice alone (thus explaining one of the genres alternate names: Hát ả Đào)

“Tally Card Songs” also known as hát ả đào or hát nói, is an ancient genre of chamber music featuring female vocalists, with origins in northern Vietnam. For much of its history, it was associated with a geisha-like form of entertainment, which combined entertaining wealthy people as well as performing religious songs for the royal court. Ca trù was inscribed on the list of intangible items of  Cultural Heritage in 2009, and marked as in need of preservation.

Another theory points to a woman named Đào Thị, a talented musician who was beloved by the Lý Dynasty Imperial Court. This theory also claims that ever since the time of Đào Thị, in admiration of her, women who held a profession as singers (such as ca trù singers) were referred to as Đào nương (“nương” here refers roughly to “maiden” or “lady”). The latter is true although this term is no longer widely used in modern Vietnam. What is known for sure is that ca trù started off like many of Vietnam’s arts as being a form of entertainment for the royal court. Officially, ca tru count the age of their  profession dating back to The Later Ly Dynasty ( Nhà Hậu Lý, 1010—1225). At that time, musicians known as hát khuôn performed only at religious court ceremonies.

It was only later on that it branched out into being performed at small inns. Indeed, it was mainly scholars and other members of the elite who enjoyed the genre, which was somewhat inaccessible to the masses (who enjoyed the Hát Chèo opera genre much more).

In the 15th Century, Ca Tru spread throughout Northern Vietnam. The artists would have been called to celebrate a son’s birth, or the signing of an important contract. They were considered outside the general social caste system so they could entertain even the most noble of clients.

In the 19th century, after Vietnam was colonized by the French, Ca Tru underwent significant changes. Besides the nobility, who were highly educated, there began a new societal class of Vietnamese people who worked for the French government. Although less educated and looked down upon by many nationalistic Vietnamese, they were particularly wealthy. Ca Tru served as a means to allow them to feel equal to the nobility in terms of entertainment they could enjoy.

This however, brought its own problems and as the aura of  Ca Tru exclusivity diminished, it gradually descended into a form of prostitution. 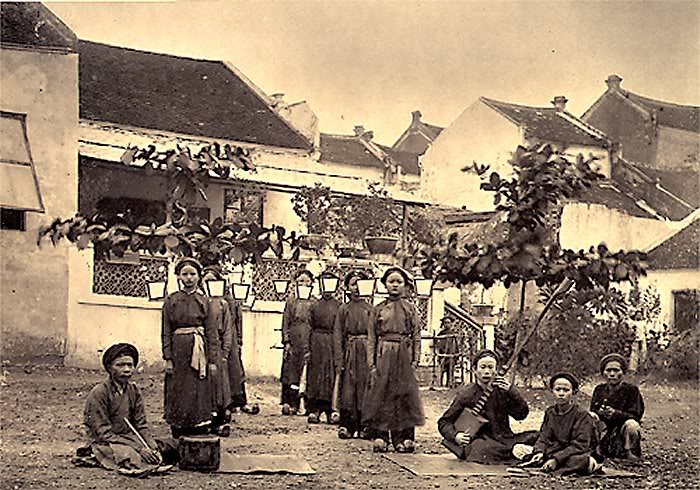 By the 20th Century, ca tru had almost died out completely. When the Communists rose to power after the August Revolution in 1945, Ca Tru was systematically suppressed, now associated with prostitution and the degradation of women. Consequently, there remained only two ca tru women:  Nguyễn Xuân Khoát and Quách Thị Hồ.

Later they both started to revive the tradition of ca tru. In actuality, men were allowed many wives ,and having extramarital affairs was nothing shocking. Thus, it was commonly known that many famous ca trù singers did indeed have affairs with important men, but it was just something to be accepted as a part of society and not considered as a part of their profession.

As of 2009, extensive efforts are being made to invigorate the genre, including many festivals and events where several types of ca trù (among other related arts) are performed. Vietnam has also completed documents to have ca trù recognized by UNESCO as an Intangible Cultural Heritage.

Ca trù, like many ancient and highly developed arts, has many forms. However, the most widely known and widely performed type of ca trù involves only three performers: the female vocalist, lute player and a spectator (who also takes part in the performance). Sometimes dance is also performed at the same time. The female singer provides the vocals whilst playing her phách (small wooden sticks beaten on a small bamboo bar to serve as percussion). She is accompanied by a man who plays the đàn đáy, a long-necked, 3-string lute used almost exclusively for the ca trù genre. Last, is the spectator (often a scholar and or connoisseur of the arts). The way in which he strikes the drum shows whether he likes or dislikes the performance, but he always does it according to the beat provided by the vocalists’ phách percussion.

There are 56 types of melody, known in Vietnamese as ‘thể cách’. New observers to the art often comment on how strikingly odd the vocal technique sounds, but it is the vocals themselves that are essential in defining ca trù.

In Hanoi, a street called Kham Thien was very famous for its ca tru theatres where the beautiful voices of the females singers attracted people from all around. In addition, it was known by different names that corresponded to various historical periods. At the weekend, one could enjoy it in Hanoi’s Old Quarter. Ca Tru was also popular in 60 of the northern provinces of Vietnam: Phu Tho, Vinh Phuc, Hanoi, Bac Giang, Bac Ninh, Hai Phong, Hai Duong, Hung Yen, Ha Nam, Nam Đinh, Thai Binh, Ninh Binh, Thanh Hoa, Nghe An, Ha Tinh and Quang Binh.

Nowadays, it is an intimate, atmospheric evening in a traditional Vietnamese house in Hanoi’s Ca Tru Club. An hour long performance features authentic ca try along with some other indigenous singing and instrumentation. There is another venue located in The Old Quarter, at 87 Ma May Street, and performances are held at 8pm every Tuesday, Thursday and Saturday. If you are strolling through The Old Quarter, perhaps you would like to enjoy a Ca Tru evening and witness a unique insight into the music and entertainment of Vietnam.