Cat Ba Island belongs to Hai Phong, is 30 km far from this and the journey takes us 1 hour using hydrofoil departure from Ben Binh Dock and 4 hours by wooden boat from Halong City. Surrounded by 336 islets, Cat Ba Island is the main one and it is the largest island in Ha Long Bay as well. While the vast majority of Ha Long Bay’s island is in inhabited, vertical rocks sticking out of the sea, Cat Ba has a few fishing villages. The human’s population is very small. Today, the island human’s population of 12,000 is concentrated in the southern part of the island including the fishing village of Cat Ba. The terrain too rocky for agriculture and most residents earn their living from the sea. The local economic bases on fishing and tourism services. Fortunately Cat Ba fishing seaport is near the 2 important markets: Ha Long and Hai Phong cities.

En general the life is quite hard so many inhabitants joined into exodus Vietnamese “boat people” in the 80s. These overseas Vietnamese have sent back money to relatives and families on the islands to build hotels as you see.

There are more and more Vietnamese tourists that have their vacation here in the summer, and foreign visitors prefer staying on the island to Halong city so hotels, mini hotels grow up as mushroom. The island’s face change quite fast during last decade.

The island covers 100s.q km, of which half is declared a national park in 1986 in order to protect the island’s diverse ecosystems. These include subtropical evergreen forest in the hills; fresh water lakes swap forest at the base of the hills, coastal mangrove forests, small fresh water lakes and off-shone coral reefs. Most of the coastline consists of rocky cliffs, but there are many beautiful beaches (about 29 beaches) the nearest one is Cat Co 1 and Cat Co 2 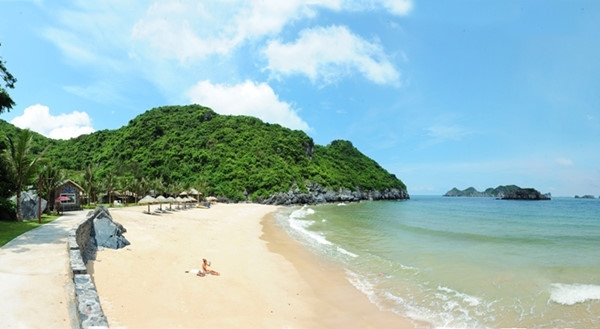 There are numerous lakes, waterfalls, and grottos in the spectacular limestone hills, the highest of which rises 331 m above sea level.

The water of Cat Ba islands is home to 200 species of fish, 500 species of mollusk and 4000 species of arthropods. Larger marine animals in the area include seals and three species of dolphins. The prehistoric man lived in the island 6.000 and 7.000 years ago. The archaeological vestiges found in 17 sites on the islands prove this.

Cat Ba National Park is home to 15 types of mammals including Fransois monkeys wild bear, deer, squirrels and hedgehogs (nhim) and 21 species of birds have been sighted, including hawk (dieu hau), hornbills and cuckoos. In the middle of the national park, there is the Ech Lake, which covers an area of three hectares.

The 620 species of plants recorded on Cat Ba included 118 species of timber and 160 plants with medical value. There are two caves in the national park that are open to visitors. One has been preserved in its natural state while other has historical significance; this is used as a hospital during American war.