Surprise Cave is one of the widest and most beautiful caves in Halong Bay, and also the site of many unique rock formations that can’t be found in anywhere on the earth. In 2012, Surprise Cave was selected by the Czech Association of Travel Brokers and Offices as one of the Top 10 Most Beautiful Caves in the World.

Surprise Cave is located in the center of the World Heritage Site Halong Bay, on Bo Hon Island. The cave has an area of 12.2000m2, there are two compartments, and the cave ceiling has many stalactites. The French call this cave “Grotte des surprises” (Cave of Surprise). The mouth of the cave is about 25 meters below sea level, hidden under the  foliage. Outside of the cave is a calm sea area that is surrounded by the arches of Bo Hon Mountain. In this sea, the fishing boats gather near village which is surrounded by Bo Nau Cave, Me Cung Cave, Luon Cave, and Ti Top Island.

The road to Surprise Cave that is under of the foliage of the forest and stone steps. While walking on the stone steps to the cave, visitors will feel as if they are on a stairway to heaven.

Exploring the inside of Surprise Cave

Stepping through a narrow rock slit to enter the cave, visitors will be surprised at how wide its interior is. The cave is divided into two main compartments, and it is like a large theater that can accommodate thousands of people. 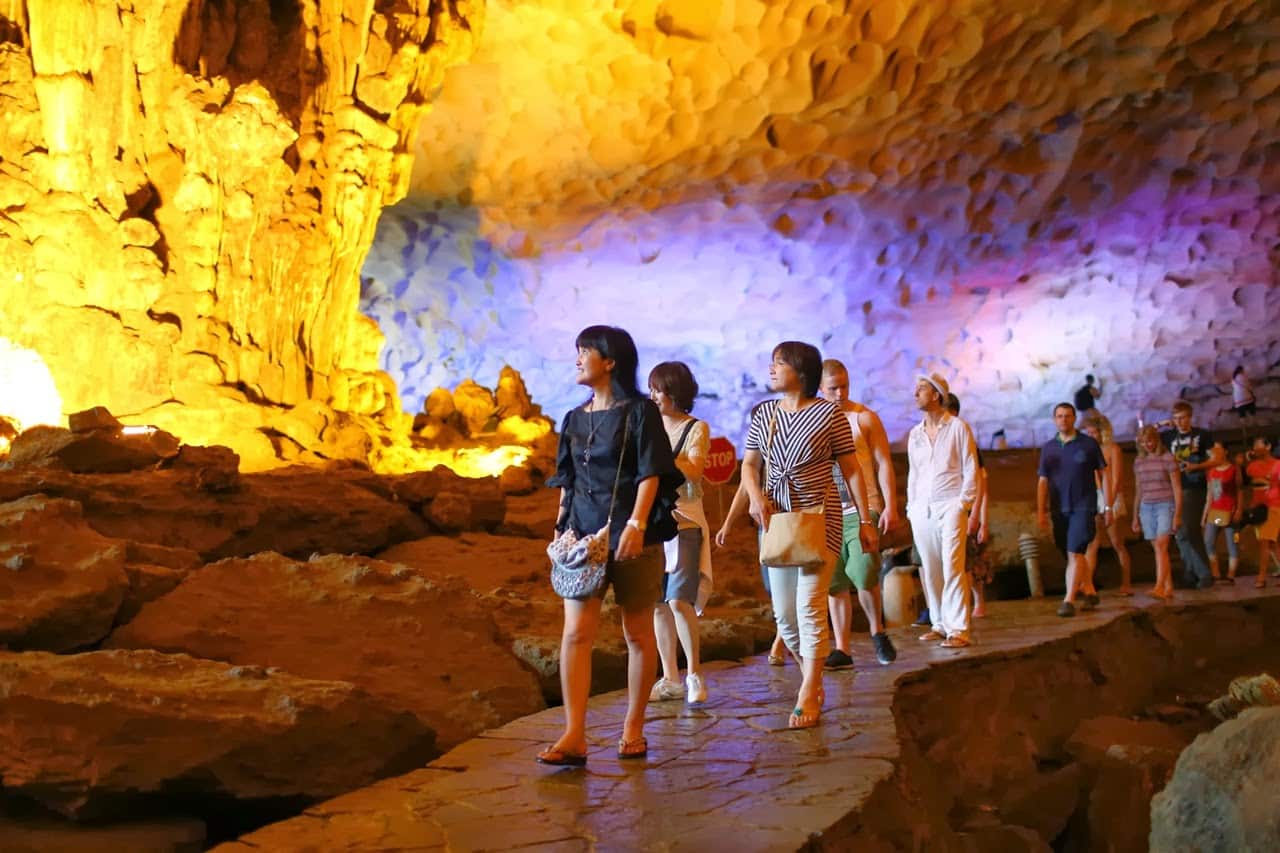 The ceiling of the cave is 30 meters  with many small indentations that make it look like a giant medieval opera house. The ceiling of the outside compartment is very high with lots of stalactites hanging down. In particular, the second compartment extends immensely with curved domes with hat shaped patches,. This area has almost no stalactites because the top of the cave has no cracks or dripping water.

This is one of the typical karst caves and is of great scientific interest. At the entrance,  the stalactites are shaped like a horse and long sword. According to the local legend, “After defeating an enemy, Saint Giong (Thanh Giong  is a mythical folk hero of Vietnam and one of The Four Immortals) helped the people dispel the ghosts. When finishing his work, Saint Giong flew to heaven and left the sword and precious horse to make the people feel safe and ward off their enemies.

In the middle of the cave is a huge straight stalactite column from roof to floor. Toward the end of the cave, there are giant rocks that are bigger than a room. In here, you will see many unique artworks and  shapes such as lions, banyan trees, dinosaurs and bears. Going to the end of the cave, you can admire the sparkling palace garden with a clear lake and the poetic scenery of trees and birds. The garden also have energetic monkeys that live here and liven up the atmosphere.

Located in the world natural heritage of Halong Bay, Surprise Cave is a must visit destination in Halong. If you get the chance to explore it, you will be amazed by its  shimmering beauty.