Situated in the Northeast of Vietnam, Halong Bay is in the Gulf of Tonkin, which includes Halong City, the township of Cam Pha, and a part of the island district of Van Don. Halong Bay borders Cat Ba Island in the southwest, the East Sea in the east, and the mainland, creating a coastline of some 120km.

Halong Bay is made up of 1,969 islands of various sizes, 989 of which have been named. There are two kinds of islands; limestone and schist, concentrated in two zones. The southeast is part of Bai Tu Long Bay while the southwest belongs to Halong Bay. This densely concentrated zone of stone islands, world famous for its spectacular scenery of grottoes and caves, forms the central zone of Halong Bay, and is recognized as a UNESCO World Heritage Site. 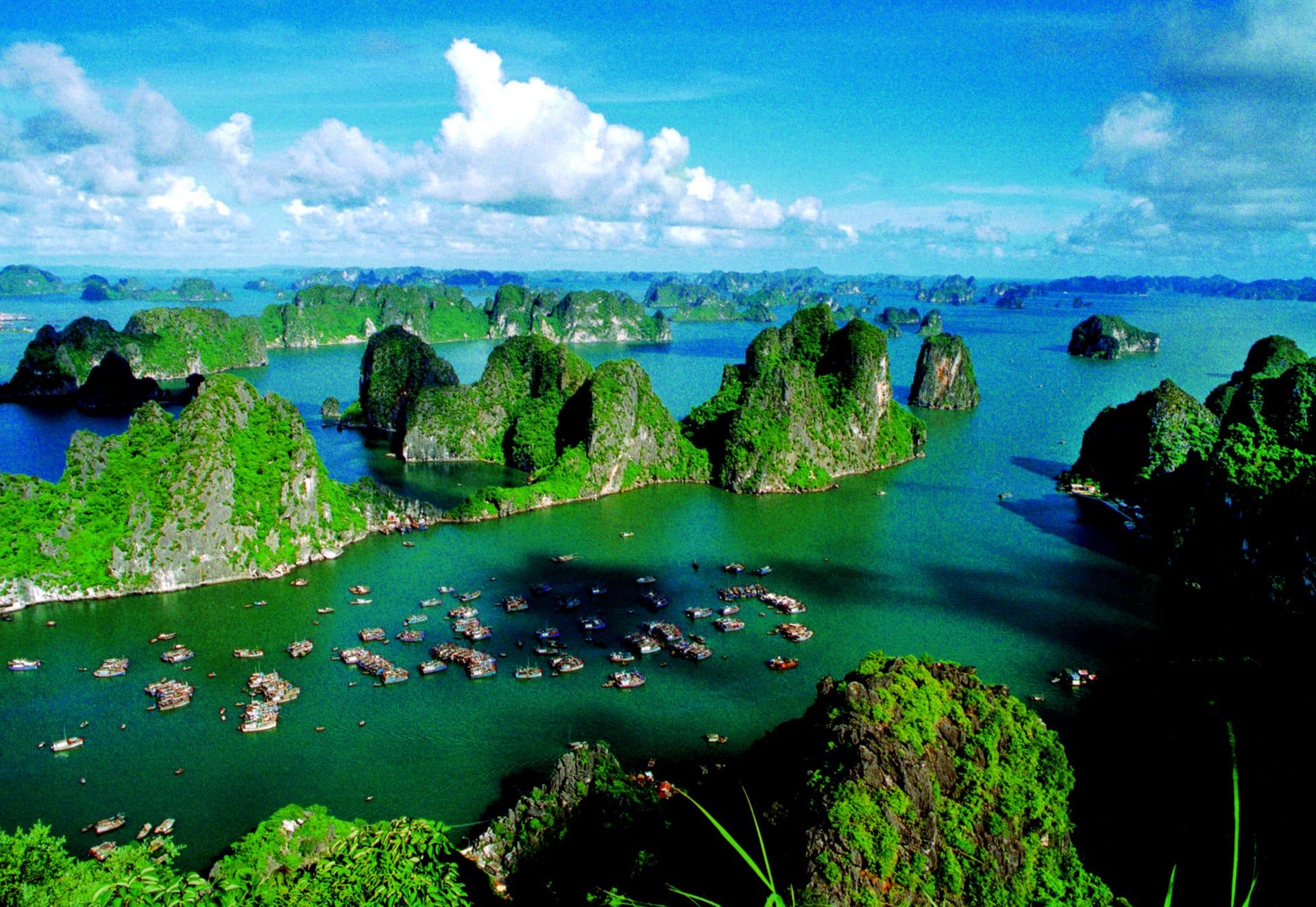 The bay itself has an area of 43,400 ha, consisting of 775 islands, which form a triangle with the island of Dau Go (Driftwood Grotto) to the west, the lake of Ba Ham (Three Shelter Lake) to the south, and the Cong Tay Island to the east.

Halong Bay has many links to the history of Vietnam. For example, there are famous geographical sites such as Van Don (the location of an ancient commercial port), Poem Mountain (with numerous poetry engravings about the emperors and other famous historical figures), and Bach Dang River (the location of two fierce naval battles fought against foreign aggressors).

Historians have documented that Halong was one of the first cradles of human existence in the area, at archeological sites like Dong Mang, Xich Tho, Soi Nhu, and Thoi Gieng. It is also a region of diverse biology, home to  numerous unique ecosystems of saltwater forests, coral reefs, and tropical forests that contain thousands of species of animal and plant life. With all this in mind, UNESCO recognized Halong Bay as a natural heritage site of worldwide importance in 1994.

Bai Tu Long Bay is described as a secret haven as it is lesser known than its more famous sister, Halong Bay. Identical to Halong Bay in many ways, Bai Tu Long Bay was born from the same legend.

The original and charming Bai Tu Long Bay comprises many islands of both earth and limestone, and are scatte red across three communes: Halong, Van Yen and Minh Chau in the Van Don District.

The Bay covers a total area of 15,783 hectares, including 6,125 hectares of high islands, home to 1,909 species of fauna – a priceless ecological treasure of Vietnam. To date, Ha Long and Bai Tu Long Bay are home to 59 caves, of which 23  are newly discovered, and 19 now open to tourists.

According to Associate Professor Dr. Bui Tat Thang from the Strategic Development Institute of the Ministry of Planning and Investment, Bai Tu Long includes all three fundamental ecosystems: forest, wetlands, and sea – creating a diverse area for different species to live and develop.

Bai Tu Long National Park has been officially operating since April 2002. Besides the incredibly diverse biological environment, the park also has significant archeological artifacts found in Soi Nhu Cave, where there is evidence of ancient people residing here some 14,000 years ago.

The park has 1,000 hectares of wetlands, including mangrove forest, sandy and rocky tidal banks and sea-grass that provide food, breeding grounds and habitats for animals, including migrating birds and insects. The wetlands ecosystem, with its impressive scenery and biodiversity, has attracted many eco-tourism, environmental education and research activities.

The coral areas account for only a minor section of the park, found mostly on the fringes of islands but they play an major role in aquatic resources. The sectors provide a place for many kinds of sea creature to lay eggs, shelter, and hunt. It has high biological productivity, generating organic substances and an important food source, but is also a gene bank for many types of sea species. Bai Tu Long National Park needs to have sustainable protection and conservation procedures in place to preserve this incredible habitat.

Once upon a time, to protect Vietnam’s border from invaders, God sent the mother dragon and her children to help the Vietnamese people defeat their enemies. When the enemy’s boats approached the shore, the dragons sprayed countless pearls across the sea, which then turned into thousands of limestone islands that formed a solid wall to block the invaders’ paths.

After the victory, having fallen in love with the spectacular landscapes and hospitality of  Vietnamese people, the dragons decided to remain. The location where mother dragon landed is Halong Bay, while her children settled in Bai Tu Long Bay. Their tails created Long Vi, whose white sandy beach stretch for more than 10 km. Many of the other islands in Van Don District have names linked to the legend, such as Minh Chau Island (Bright Pearl) and Ngoc Vung Island (Glowing Pearl).

For generations, people have viewed pearls as a precious item and a gift a man takes to his fiancée’s house to formalize their betrothal. A symbol of his love, strength, and courage, pearls that are blue in color represent purity; pink indicates sophistication while silver represents elegance.

The ancient Van Don Trading Port was well known for the variety of goods traded there, including natural pearls, which were used to make expensive jewelry for the elite. Foreign traders paid enormous sums for the pearls as they were considered rare items around the world.