Viet Vo Dao is a martial art which contains the national traditions and spirit of the Vietnamese people. A diverse and trendy form of combat, it is practiced by and suitable for all ages. This article will help you learn more about the history and origins of Vovinam.

Founded by Nguyen Loc (1912-1960), Vovinam is based on a marriage of both Chinese and Vietnamese martial arts combined with a form of wrestling that was introduced to Vietnam in 1938. Grand Master Nguyen Loc also created a doctrine called “Mental Revolution” (Cach mang Tam Than), to enusre the practice helped to develop not only physical prowess and self-defence skills, but also mental fortitude and discipline. The main tenets of the doctrine are to focus on virtues such as self-confidence, courage in the face of danger, nobility and mercy.

Vovinam draws from the history of Vietnam’s struggle for independence and defense of the nation. Nowadays, it is practiced all over the country. In Hanoi, you can find Vovinam clubs in the cultural house of each district, in universities and schools along with many private clubs. 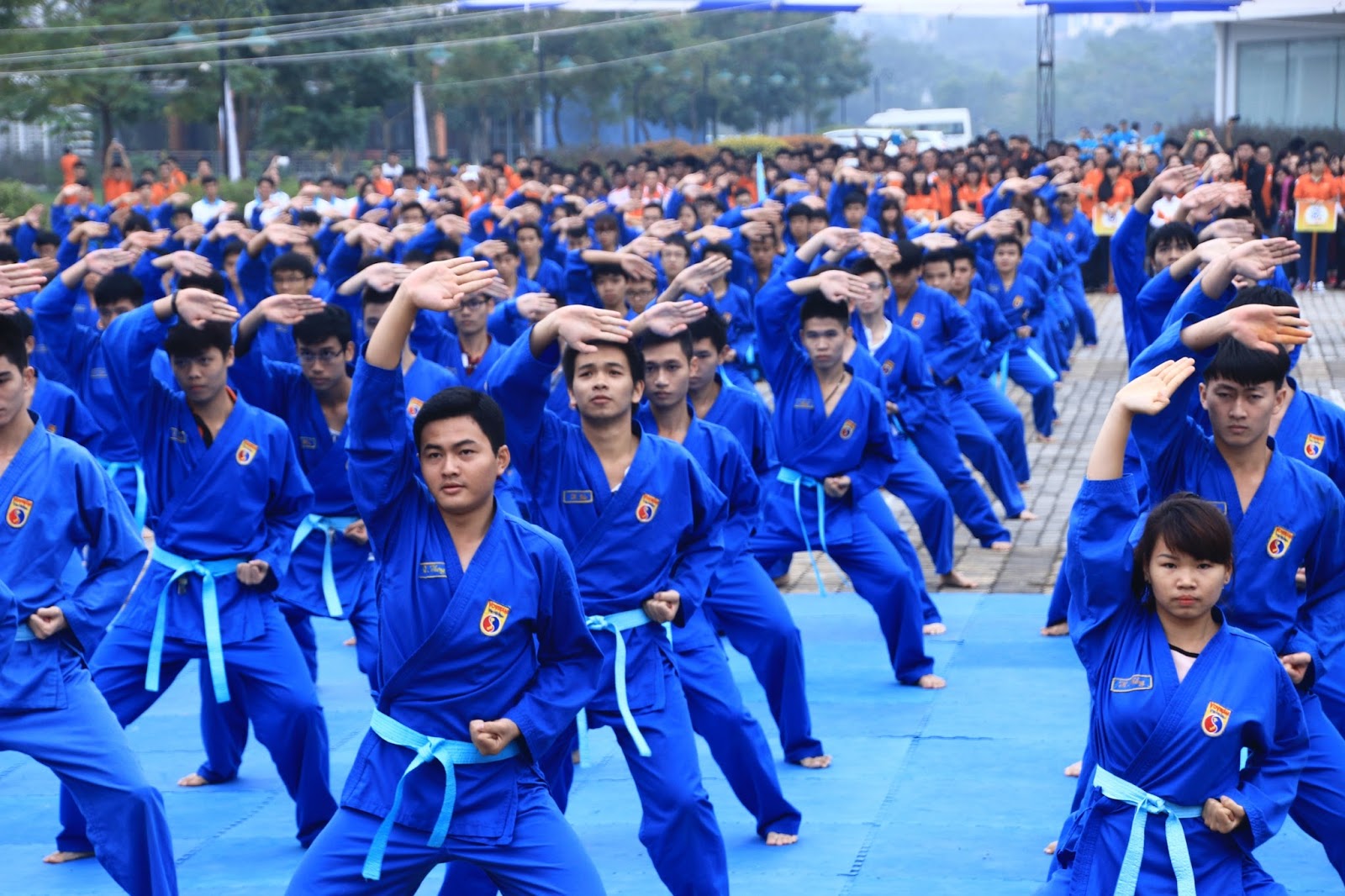 The Vovinam logo is composed of a rectangle conjoined with a circle, angular at the top, round at the bottom. Within this yellow shape, the red text “Vovinam” is written above the marine blue text “Việt Võ Đao”. Under the text appears a yin-yang symbol in red and marine blue. The yin-yang symbol is surrounded by a thick, white circle, symbolizing the being of the Dao, with the mission to merge the yin and yang and to enable the ‘chi’ or life force. A yellow map of Vietnam is superimposed on the yin-yang symbol.

From 1938 to 1964, there was no official uniform. In 1964, the first Council of Vovinam-Viet Vo Dao was gathered to codify and harmonize the discipline, establishing a ranked hierarchy and uniforms, while developing a training curriculum according to rank. Blue is used as the official color for Vovinam uniforms worldwide, however from 1973-1990, the separate “Việt Võ Đạo Federation” chose black as its color of choice. 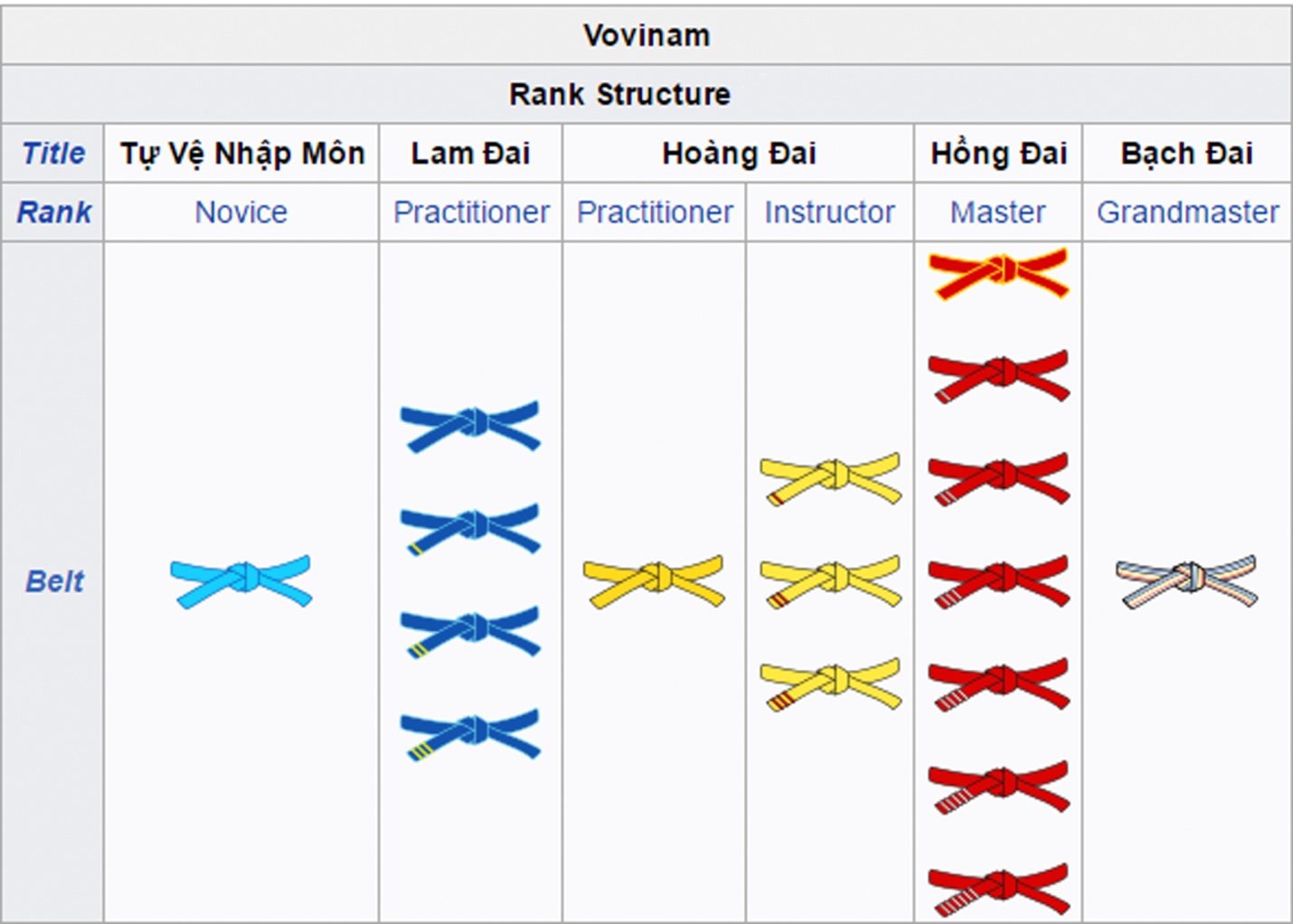 Blue: Represents the color of hope, which means that the disciple has entered into the life of a martial arts and hopes to learn the fundamental philosophy of Vovinam.

Yellow: Represents the color of earth, which means that the martial arts and its philosophy have permanently become a part of the Vovinam’s disciple.

Red: Represents the color of fire: the martial artist and is developing and the color represents a torch that guides them on the path of  Vovinam.

White: Represents the color of chastity, which means that the disciple’s martial arts skills have reached the highest general level.

Thin White Belt: Contains lengthwise stripes in blue, black, yellow and red. It symbolizes complete mastery of Vovinam and is reserved only for Grand Masters.

The techniques of Vovinam include striking with the fists, feet, knees, and elbows. It incorporates a variety of wrestling techniques and leg-attacks to force the opponent to the ground. It is also practiced with weapons, such as a thick wooden staff, cutlasses, knives, handguns and rifles (without bullets of course).

Long punch: A backfist swung reversely to the temple.

Halong Emperor Cruises offers Vovinam on board the boat for morning exercise. Travelers can join this guided session of light exercise poses, taking in the magic of the Halong Bay sunrise while awakening the mind, body and spirit. In addition, you will practive a small part of Vietnamese culture and learn about its national martial art.