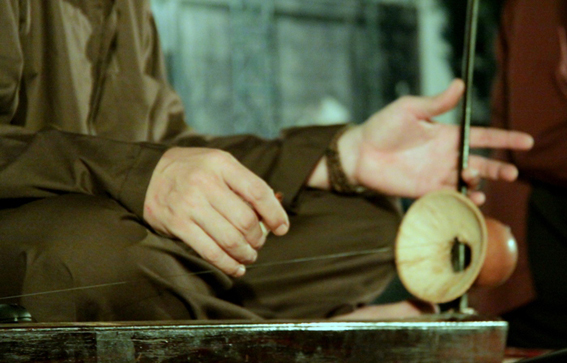 According to the “Dai Nam thuc luc tien bien”, a Vietnamese history book composed by The Nguyen Dynasty in the 18th century, the first Dan Bau was made in 1770. However, nowadays, many scholars estimate its age to be up to one thousand years older than previously thought. The first appearance of Dan Bau was a very simple instrument comprised of a bamboo section, a flexible rod, a calabash or half a coconut. After a long process of evolution and improvement, the present form of the Dan Bau is a bit more sophisticated and is central to Vietnamese folk music, a genre still popular today across the country. Its other traditional application is as an accompaniment to poetry readings.

In Vietnamese, Dan means a stringed instrument, and Bau means gourd. The appearance of the Dan Bau looks like exactly what it says. Originally, the Dan Bau was made of just four parts: a bamboo tube, a wooden rod, a coconut shell half, and a silk string. The string was strung across the bamboo, tied on one end of the rod, which is perpendicularly attached to the bamboo. The coconut shell was attached to the rod, serving as a resonator. Now, the bamboo has been replaced by a wooden soundboard, with hardwood making up the sides and softwood as the middle. An electric guitar string has replaced the traditional silk string. 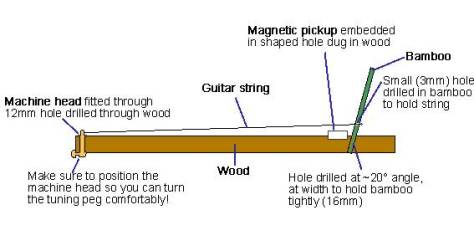 Dan Bau consists of an oblong box-shaped soundboard, slightly narrower toward one end, with a slightly warped top made of unvarnished soft light wood, sides made of hard wood, and a bottom of light wood that is pierced with holes for better sound. At one end of the soundboard is a flexible bamboo rod that goes through a dried calabash whose bottom end has been cut out before being fixed on the sounding board. At the other end of the sounding board is a peg made of wood or metal used for tuning. The metal string is attached to the rod and the peg. The pluck is a pointed stick of bamboo or rattan.

Although having only one string, it can emit all the sounds in the pentatonic scale. The eight notes of Vietnamese music give modulations of greater amplitudes than those obtained by any other single-stringed instrument in the world.

The Dan Bau is normally tuned to the note C. It uses harmonics (or overtones). When playing it, the musician plucks the string while touching it lightly with the side of his hand at a point producing a sound. However, because the flexible rod causes the tension of the string to vary, the pitch may be made to rise or fall, the note may be lengthened or shortened, and trills can be played.

The technique involving the fingers of the left-hand includes vibrating, pressing, along with alternating pressing and releasing. The Dan Bau can also be performed on a scale consisting of third-tones or even quarter-tones. The notes played by the Dan Bau are smooth, sweet, and captivating.

According to the artist, Vu Tuan Duc, the older type of Dan Bau is recognized as a simple instrument that was used by people to make a living singing Xam in the old feudal society. Dan Bau is created with great care and attention by the Vietnamese people, with a unique structure and performance style. This makes its sound closer the voice of the citizens. Therefore it conveys those thoughts and feelings that people want to express. With soft and charming sounds, the Dan Bau was used only to perform Vietnamese old traditional music such as “Cheo,” a favorite operatic genre that included many folk stories about North Vietnam. The music of the ancient capital, Hue, is a combination of traditional local music and royal chamber music from Central Vietnam.

Dan Bau has a unique timbre that is used popularly in the daily life of Vietnamese people. Its sound was attached to the flow of the history of Vietnam. Dan Bau expresses successfully, not only the different folk songs of each region of the nation but also foreign tunes, from folk music to light music. Because of its uniqueness, whenever many foreigners consider Dan Bau as a symbol of Vietnam.