Cat Ba Island is located in the south of Halong Bay, close to Hai Phong City. It is approximately 30km from the center of Hai Phong City, and 25km from Halong City. Known as the ‘Pearl of the Gulf of Tonkin’, it is the largest island of the 1969 islands in Halong Bay. The bay not only has a romantic sandy beach, modern and luxurious hotels and resorts, but also a traditional culture festival.

Held on April 1st each year, the Fishing Village Festival is one of the most famous cultural events in the Hai Phong region. It is held to commemorate the time when President Ho Chi Minh visited the village on 1st April, 1959. Nowadays, it represents the opening day of the Cat Ba tourism season, and the start of the fishing season for the local fishermen.

Highlights of the festival arek games such as swimming, windsurfing, and basket boat racing on the sea. Two very fun spectacles are the giant game of Tug of War and a unique and charming Dragon Dance. The participants are divided into two teams and complete a sea-based Tug of War in which they must pull the opponent’s boats to the other side.

Dragon Boat Racing on the sea is the most important and exciting activity of the festival. Participating teams include the Cat Ba host team and other teams from all over the country. Dragon boats are rhombus shaped. Measuring 11m in length and 1.5m width, they are very expensive to construct with a cost up to 30 million (1400usd) per boat. Each boat can accommodate between 22 and 26 people. The race is 1km long with a flag signal at both ends, and boats must complete 3 or 4 laps. The fastest boat is then declared the winner which brings great honor and pride to the winning team. 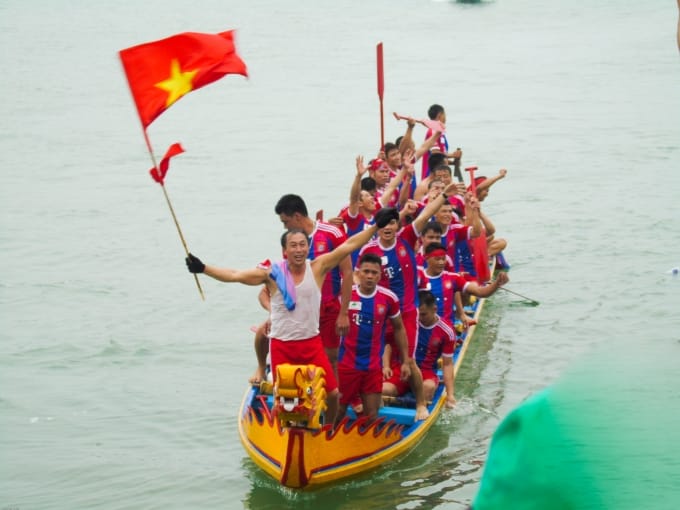 In recent years, the scale of activities at the festival has been expanded, and this attracts lots of domestic and international tourists to Cat Ba, who want to experience local folk culture,  and see up-close, the traditions of Vietnamese fisherpeople.