I remember the day when I received my cousin’s e-mail. His announcement that he would visit us in Hanoi came as a shock. People in Hawaii have a word to describe dudes like him: “local.” Glenn was born and raised in Oahu, one of eight major islands in America’s 50th state. He had been off the island only a few times: to attend UC Berkeley California for college and law school; to visit his sister in Wisconsin; to attend a world environment conference in Brazil. Otherwise, he had never visited Europe or Asia.

When I answered his e-mail, I asked: “Hey, what happened? Did a cocoanut fall on your head?” ,”Something like that!” he quipped.

As with most visitors, he put his holiday in our hands. We faced a tough challenge because anyone from Hawaii is already spoiled by their own exquisite natural environment.

My husband and I have lived in Hanoi for five years. As with most expats who have lived here for a while, we visited Halong Bay numerous times. Is it ever possible to tire of this UNESCO World Heritage Site? I doubt it. For anyone who comes to Hanoi, we insist that they experience an overnight tour.

Over the course of our stay in Hanoi, we’ve taken all types of cruises to Halong Bay. From the low-cost junks to the Paradise Peak. So when I called my friends at Luxury Travel Vietnam, I asked, “What’s new? Moi la gi?”

The staff  informed me of a new cruise organized by Emperor Cruises. The cruise was inspired by the luxurious life of Emperor Bao Dai, Vietnam’s last. Therefore, the boat itself is a discovery of the 30s with inspired design, rich in history and royal heritage. Travellers experience every moment with Emperor Cruises by being treated as kings and queens, indulging in services such as music, fine art, architecture, culture, cuisine, history, and outdoor & indoor activities, life on boat, stories of the Emperor Bao Dai through the design and where everything is all included. 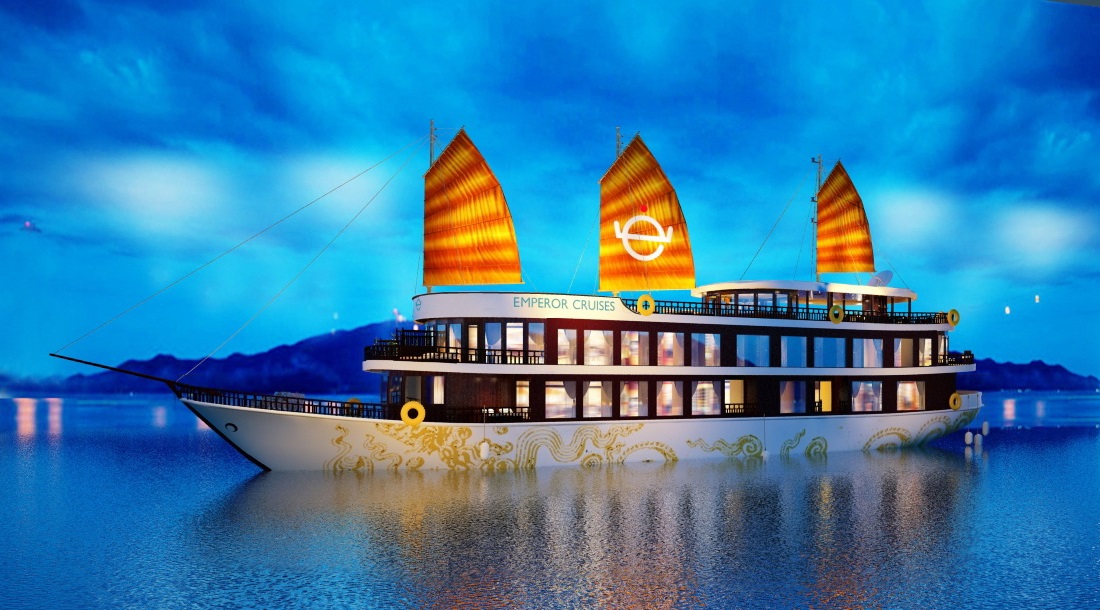 They said it would combine the experience of a traditional junk with the comforts expected by today’s luxury traveler. No longer did we have to choose between traditional style versus a bit of extravagance. We weren’t disappointed in terms of comfort, food, itinerary and Vietnamese hospitality.

Emperor Cruises is a wooden junk that measures 58 metres in length. This newly built yacht, which began offering its cruises in March, featured three decks that house a royal restaurant, two bars, clubs, a gym, a small library and 8 luxurious all suite cabins. What’s really great is that each cabin features a window-not a porthole. Very often, some junk cabins don’t even come with that. The beds were comfortable, and lined with quality sheets. This may not matter to others, but to me, it’s a bonus. 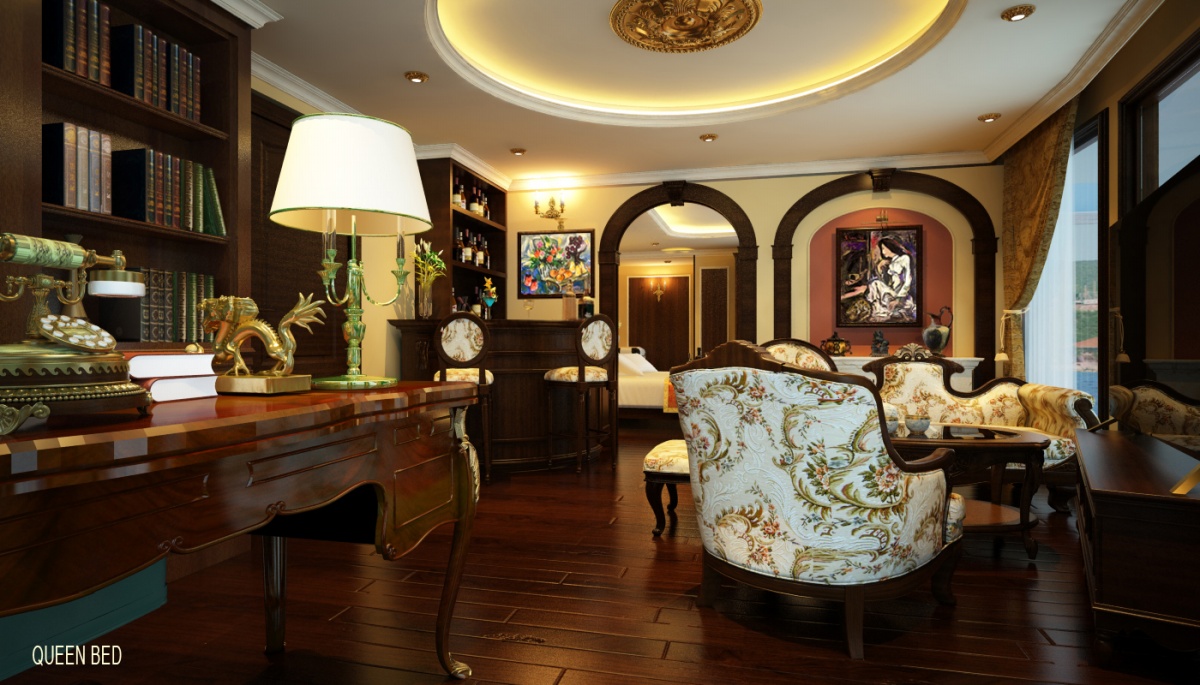 One of the pleasures of a Halong Bay cruise, of course, is eating the fresh seafood: fish, clams, shrimps, crab, etc. The quality of the meals was very good. If you like buffets, you can manage your own choices and portions. Unlike a cruise on a ship, there was just enough food to satisfy each guest’s appetite. No chance of gorging. My cousin is a vegetarian, but he still allowed himself to try some of the seafood, and enjoyed the Vietnamese style vegetables and salads. The only problem I had during our meals was deciding whether to remain seated, or run to the deck for photo opportunities. Emperor Cruises seemed to offer an itinerary that was unlike those I’ve taken before. 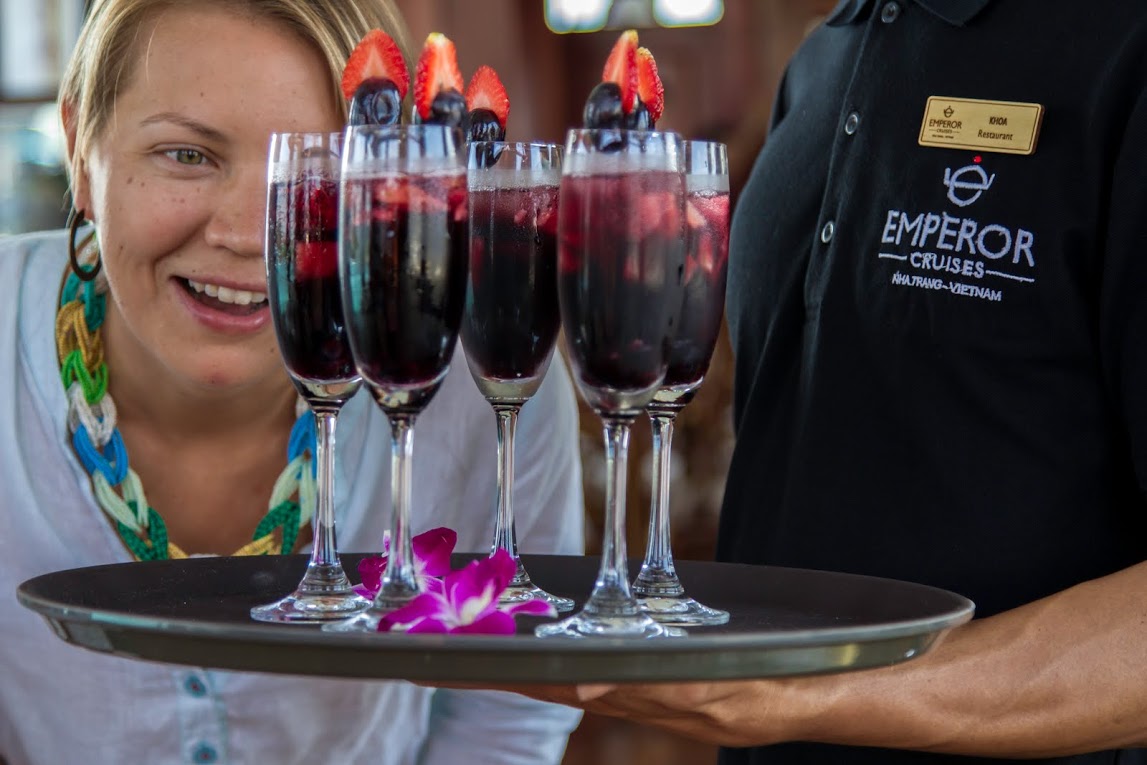 In particular, my cousin and I enjoyed visiting the floating fishing village. Here, one could see the coming and going of boat vendors selling fruit, snacks, and souvenirs. We even met a local fisherman who raised a special fish for months. One morning, a little girl paddled her way below our window to sell us a box of Lotte Choco Pies.

No trip is gratifying without the warm hospitality of its hosts. In that regard, the staff and tour guide of Indochina Sails was very attentive, friendly and flexible. So the next time, you or your guests are seeking a new experience at Halong Bay, I highly recommend treating yourself on this new luxurious junk.

My cousin hardly missed his daily routine of surfing at Waikiki. “Seeing people living close to nature, and in harmony with it, is what appealed most to me.”