In Vietnam, roughly 80% of its population is Buddhist and 20% practice other religions such as Catholicism, Taoism, and Confucianism. These religions come from outdoors and were introduced mainly in Vietnam during the past centuries. 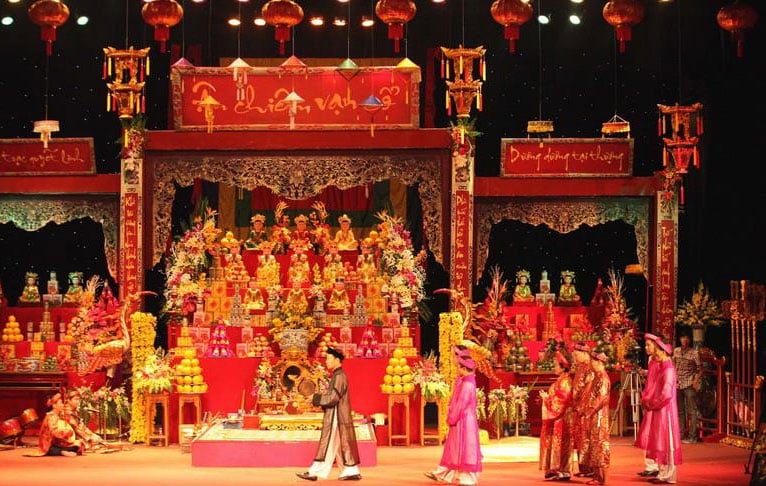 Listed by UNESCO as a Cultural Heritage of Humanity on December 1, 2016, Morther Worshipping ceremony is the latest in a long line of the nation’s unique cultural aspects to be officially recognised.

Buddhism has been practiced here since the 2nd century, as Confucianism, which became prosperous in the 11th century with the construction of the Temple of Literature, well knows as a first university in Vietnam, to promote Confucianism disciplines. Vietnamese people were introduced to Catholicism in the end of the 16th and early 17th centuries thanks to Portuguese and French priests who came to peach the religion and the latest religion Cao Dai which has took shape in the 20’s in Tay Ninh area, Southwest of Vietnam.

Despite this, they are followers of different religions that practice both ancestral worship at home, which is the ritual expression of filial piety that dates back to before the arrival of Confucianism and Buddhism.

As said, both major religions were introduced Vietnam. They are all welcomed and have taken root in Vietnamese’s society because these religions are not contrary with local conduct and disciplines villages.

But hardly anyone knows the mothers worship religion (tho mau). This is a very popular belief of an agricultural culture like Vietnam where nearly 80% population lives in rice cultivation. So there remains lot of mystical worship such as worship of new rice, tree, and genies of house, kitchen… especially traditional mother worship, a very popular folk religion of the North. In this region the style of spirits is imagined like an imperial court that rules 4 world (tu phu): Sky, Earth, Water, and Forest.

In North Vietnam, all famous pagodas, which are sanctuary dedicated to Mothers, is located near in the pagoda’s area. This altar often locates a good position, normally behind or by each side of the main pagoda, and it is designed in harmony with whole architecture of the main pagoda and natural surrounding ambience. Vietnamese people worship Mothers in the separate temple called “Phu” in Vietnamese.

Looking at the typical decoration of a Mothers sanctuary (Dien mau), the mothers are very distinctive. The Mother’s forest (Mau thuong ngan) wears green clothes, sits in the middle of the sanctuary.

Mother’s Water (Mau Thoai) who reigns World Water, wears white clothes, in charge of the water, the irrigation water and rain for Vietnamese during the year, further to their harvest and daily needs. She is located at the left hand of the altar. 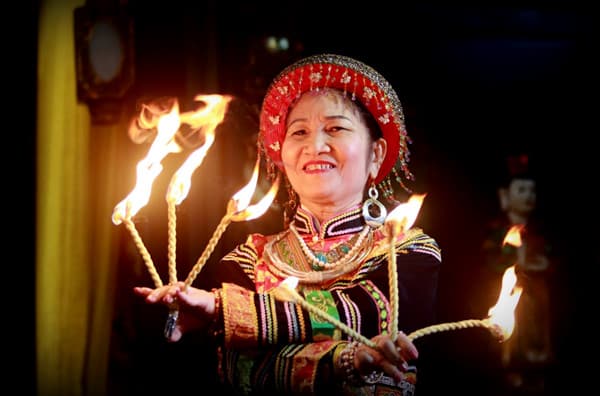 Standing in the second line in Four mothers of Four Worlds as the Mother’s Sky appears, incarnation in Mother Lieu Hanh, one the four immortal in Vietnamese culture. For long time local people are believed that Lieu Hanh could be daughter of Jade Emperor (The Ruler of Heaven). She was sent to this world to help the Vietnamese and encourage good things. She represents beauty and femininity.

In the third row in the sanctuary, you can see five ferry men (ngu vi tien ong) who considered very good at martial art, literature, and are well know for their braveness and refined talent. They help Mothers to realize their missions and help inhabitants do good things. The inhabitants admire them so they are deified from real national heroes in the history of Vietnam such as Tran Quoc Toan, Cao Lo, Yet Kieu….

The children saints are on display in the fourth row of the Mother sanctuary. They are young, clever, nimble, and helpful and can effectively support ferry men (tien ong). Moreover, they live close to Mothers and understand them and translate the mother’s wishes into reality. Each Mother (Mau) has a helpful maiden (Co or Cau), young saint Bac Le closer to Mother of the Forest, and others such as young saints Bo, Dong Cuong…and other saints kids, Kim Dong, Ngoc Nu are distinguished by their young faces and sit near the divinities. They are symbols of the future. 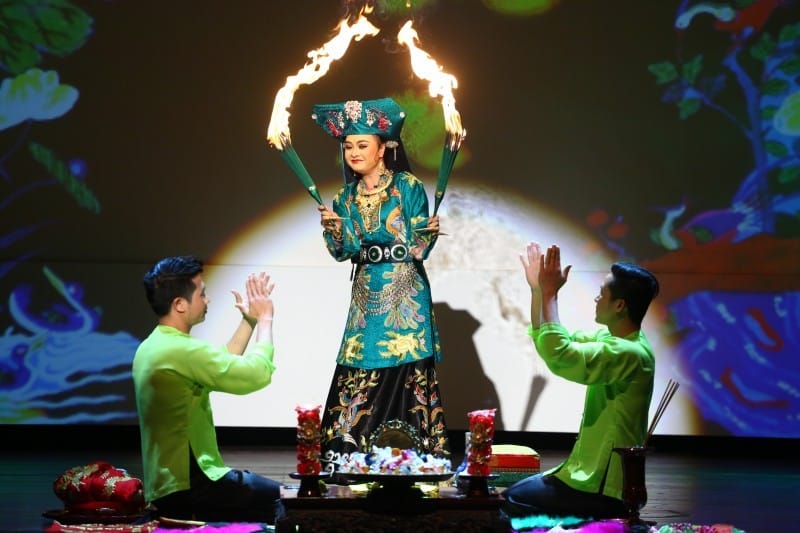 The typical event of this religion is Len Dong ceremony. The medium ceremony is a part of FOUR WORLDS: Sky, Earth, Water, and Forest.

During the very popular Len Dong ceremony, spirits are invited to possess the female performer so that they bring to life some activities in the sacred world with the good of insuring the health and property of individual or communities. Participants are believed to be able to communicate directly with the spirits who possess the medium.

The ritual “communications” are usually quite theatrical and follow some established conventions, but they can also relate to specific conditions in real life.

In our country all the famous pagodas represent the Mother’s sanctuary. They include the Yen Tu, Perfume Pagoda,  Keo, Dau pagodas… the biggest temple dedicated to mothers is probably Phu Giay in Nam Dinh Province (140km south of Hanoi) but you can see this religion’s decoration at Phu Tay Ho in Hanoi.

Because this kind of worship is similar to ancestor’s worship of Vietnamese people and it reflects the respect of the tradition, the original point, the good social relation, the piety family and the sentiments between human to human. At the same time this religion mentions a new vision about the world and geography.

Mother worship shows us this religion only exists in wet rice agricultural countries where the farmers strongly depend on nature.