(Vietnamplus) – APEC tourism ministers and senior representatives have convened in Ha Long city, northeastern Quang Ninh province for their policy dialogue, focusing on “promoting sustainable tourism for an inclusive and interconnected Asia-Pacific” with a view to further enhancing APEC cooperation on sustainable and inclusive development in the region. 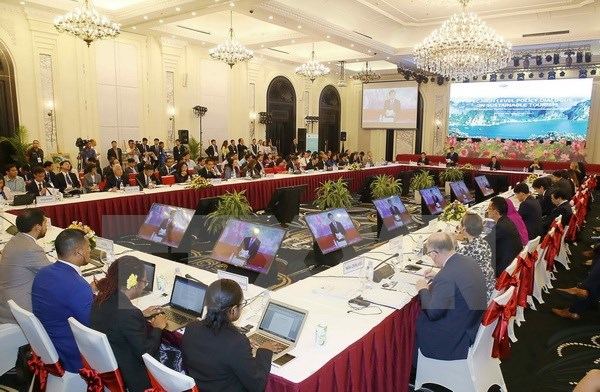 Tourism has always been one of APEC’s cooperation priorities. Tourism is forecast to be one of the fastest growing sectors in the region, currently becoming an economic pillar, and making important contributions to growth of APEC member economies. This is among key drivers promoting sustainable, innovative and inclusive growth, helping to improve people’s livelihood and regional prosperity. APEC set a target of 800 million tourist arrivals to the region by 2025.

In his speech at the opening ceremony of the APEC High Level Policy Dialogue on Sustainable Tourism on June 19, Vietnamese Minister of Culture, Sports and Tourism Nguyen Ngoc Thien, stressed effective efforts made by APEC member economies to promote sustainable tourism development will significantly contribute to realising 17 sustainable development goals of the UN.

Roger Philip Wigglesworth, head of the New Zealand delegation, hailed Vietnam’s initiative to hold the dialogue, saying that closer regional cooperation is an important step to further step up tourism links within APEC, as well as between Vietnam and other APEC economies.

Vietnam should pay attention to bolstering community-based tourism development because this helps not only better living standards of locals, but also ensures sustainable development of the sector, Roger said.

According to Malaysian Deputy Minister of Culture Mas Ermieyati Samsundina, sustainable tourism has to create jobs for people, while promoting local culture and products, and keeping a balance between community interests and other benefits.

According to the World Travel and Tourism Council, in 2016, tourism generated 1.3 trillion USD for APEC members’ GDP, directly created 67 million jobs and helped the region’s 6.1 percent export growth. According to an APEC Policy Support Unit (PSU) report, every one percent growth in the number of tourists help reduce 0.12 percent the number of poor people in the region.

Tourism is also a major part of economic growth, for every 10 percent growth in tourist in APEC departure economies, exports will grow by 1.2 percent and imports 0.8 percent in each destination economies.

The APEC High Level Policy Dialogue on Sustainable Tourism is an initiative of Vietnam in order to realise the APEC Strategy for Strengthening Quality Growth and implement one of the four priorities of APEC cooperation in 2017 – which is promoting sustainable, innovative and inclusive growth. It is also a major contribution to the International Year of Sustainable Tourism for Development set by the United Nations.